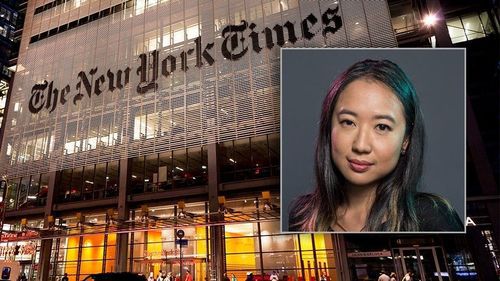 Reading Steve Sailer’s post about Vox’s explaining why one cannot be racist toward whites, apropos of the Korean lesbian now writing editorials at The New York Times, the first I saw was the pink hair.

I was reminded of Robert Stacy McCain’s reference to a writer who described “dark feminism:”

[Y]oung women in general have become darker and more bitter, and with good reason. ...

The dress style of the alternative scene — piercings, black apparel, combat boots, and surly expressions — broadcasts, “Stay away from me, I’m dangerous. …”

Septum piercings and unnatural hair colors have become so common that they have lost their whiff of punk subversion. …. The witchy, neo-pagan look is trendy.

There you have it. Madame Jeong doesn’t appear to fit that description exactly; I doubt she will be attired that way even at the Times’s editorial page. But looking at that hideous hair, and the ranting anti-white tweets the Asiatic noggin under it produced, we get the message: “Stay away from me, I’m dangerous.”

I was just about to file this post when I learned from The Daily Caller that she might actually be dangerous: A search for “cops” and “police” on Jeong’s Twitter reveals an extensive history of anti-cop sentiment and a lack of sympathy for police who are injured on the job.

In one tweet from 2014 she wrote, “let me know when a cop gets killed by a rock or molotov cocktail or a stray shard of glass from a precious precious window.”

“If we’re talking big sweeping bans on shit that kills people, why don’t we ever ever ever ever talk about banning the police?” a tweet from 2016 asserts.

She also tweeted “f**k the police” on several occasions, including one with a gif of anime characters actually physically attacking a police officer.

In addition, Jeong repeatedly tweeted about killing men, and joked that, even if only “bad men” were killed, that would still include all men.

She tweeted in 2014, “kill more men,” and seemed to sadly state at one point, “I’m likely to actually kill zero men in my lifetime.”

White women were not spared from Jeong’s rage — during the 2016 election she eloquently tweeted “f** white women lol.”

So the newest editorial writer for the Times advocates murder. Was that just answering twitter trolls, too?