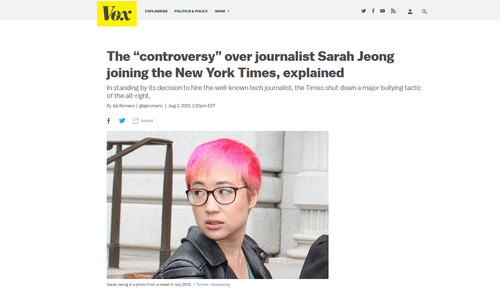 Vox Explains Why You Can't be Racist Against Whites

Vox explains why it’s not racist to be racist against whites:

In standing by its decision to hire the well-known tech journalist, the Times shut down a major bullying tactic of the alt-right.
By Aja Romano@ajaromano Aug 3, 2018, 2:20pm EDT

… After the New York Times announced Jeong’s hiring, the alt-right used her old tweets to accuse her of being racist against white people …

In tweets like the one embedded above, Jeong appeared to be commenting on the idea that white people often believe they are being discriminated against when they aren’t. To equate “being mean to white people” with the actual systemic oppression and marginalization of minority groups is a false equivalency.

Racism is the greatest sin of our age … except against whites … who are either too superhuman or too subhuman that they shouldn’t mind.