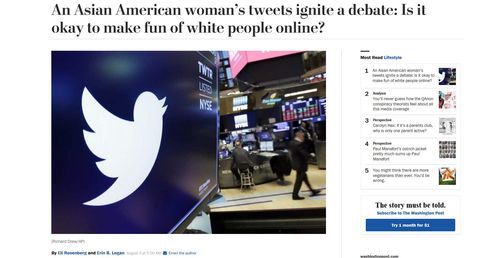 The Intersect
An Asian American woman’s tweets ignite a debate: Is it okay to make fun of white people online?

…But in a country in the midst of a painful debate about white supremacy and privilege, Jeong’s episode has exposed a deeper rift between some conservatives — whose political ideology has been marked by the rise of a president who has trafficked in racially charged rhetoric and policies — and the left, pointing to a fundamental disagreement about the nature of race and power in the United States.

At right-leaning outlets such as Fox News, the Daily Caller, the Gateway Pundit, Breitbart and Infowars, Jeong’s tweets were skewered as “racist,” “offensive” and “anti-white.” …

To some conservatives, her hiring, and the subsequent defense issued by the Times, was an example of how liberals get away with their own brand of racism — against white people.

… But others were quick to say that the statements Jeong made could be skewed as racist only if the culture, history and current sociopolitical context of the United States were ignored.

“Part of the reason it was so easy for the outrage to be manufactured in the first place was it was completely decontextualized and ahistorified,” said Nolan L. Cabrera, an associate professor at the University of Arizona who will publish a book in the fall about racial attitudes held by white college students. “Then it was easy to drum up anger and say it looks like she hates white people. That only makes sense if you are willfully ignorant of 400 to 500 years’ history and contemporary social context and also the context from which the tweets were sent.”

It is likely true, as many have pointed out, that if any minority group were substituted in the place of white people into Jeong’s statements, she would not have kept her job. Some edited Jeong’s tweets to hammer home that idea, replacing the words “white people” in her tweets with “black people” and “Jewish people.”

But Cabrera said the idea was “a complete false equivalence,” noting that whiteness isn’t a cultural identity the way being black, Japanese American or Jewish is.

You are just hideously white bread voids of mayonnaise and vanilla.

There’s a reason my latest Taki’s column is called A Half Century of Amnesia.

“You hear that all the time: Substitute white and put in minority group x,” Cabrera said. “The term ‘racism’ is not the equivalence of prejudice or bigotry. It’s an analysis of social inequality along the color lines and an analysis of power dynamics and social oppression. None of which has ever been in the hands of people of color or communities of color: There’s never been the social structure to be able to oppress white people.”

Besides, you white blanks are Bad and us POCs are Good and therefore we deserve to take your jobs and land and demean your ancestors.