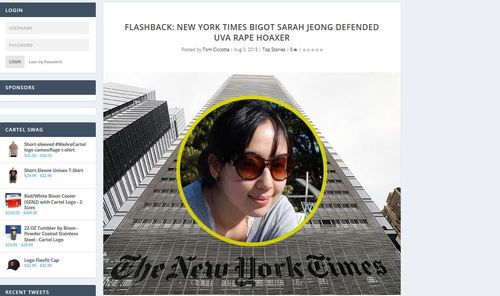 In 2014, Rolling Stone magazine published the story of University of Virginia student Jackie Coakley, who claimed to have been ganged raped by several of her peers as part of a fraternity initiation rite. As the piece of Jackie’s story began to crumble, recent New York Times hire and notorious bigot Sarah Jeong, who recently came under fire for her history of anti-white tweets, aggressively came to her defense.

Of her many tweets on December 5, 2014 (a week after I blogged about it) defending the veracity of the Rolling Stone fraternity initiation gang rape on broken glass hoax, here’s a good one:

Quite a track record …

Seriously, though, how unusual is Sarah Jeong’s race/sex animus for a salaried journalist in 2018? Not very …

Jeong appears to have deleted a longer post from three days later on how we must believe Jackie. From Autostraddle on December 10, 2014:

This Might Be The Most Important Moment Ever To Fight Rape On Campus
BY AUDREY
DECEMBER 10, 2014
10:09AM PDT

… As feminists and anti-rape activists, we must try to process the horror of what happened to Jackie and what happens to so many people so often — this stunning writing by Sarah Jeong is one place to start.

Fortunately, the Wayback Machine archive has it:

Something Terrible Happened to Jackie