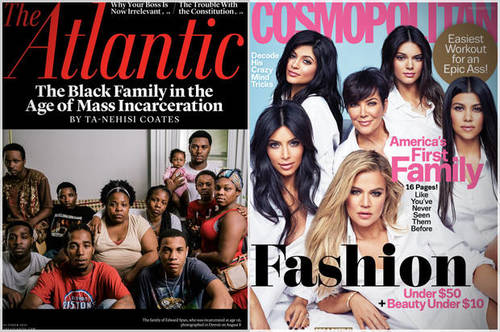 In search of the reigning bad ideas, I don’t usually delve as far down the food chain as Salon, but a friend recommends this essay:

I don’t think I’ve encountered an article that was so thoroughly wrong, and specifically confused about causation, and also wanting everything both ways.

The big father figure lie: Race, the Kardashians and the latest war on Black moms 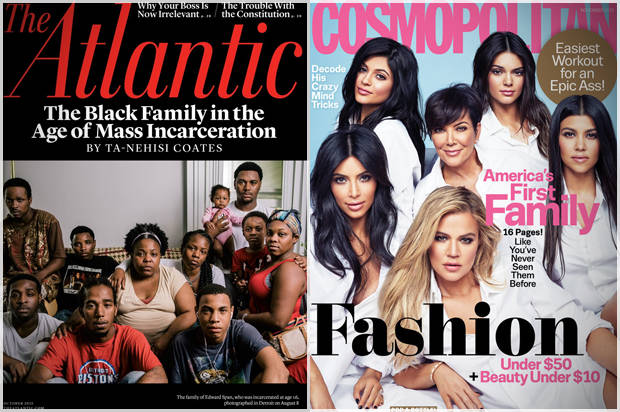 Brittney Cooper is a contributing writer at Salon, and teaches Women’s and Gender Studies and Africana Studies at Rutgers. Follow her on Twitter at @professorcrunk.

Cosmopolitan magazine has declared the Kardashians America’s new first family. Certainly, this symbolic dethroning of the Obamas is shot through with every kind of upsetting racial implication, a point Black Twitter has been swift to point out. Apparently now that the official first family is African-American, achievement of a nuclear family is no longer a mainstream cultural aspiration. While Black families continue to labor under the burden of being exceptionally normal like the Obamas or escaping the supposedly normal “pathology” of the non-nuclear Black family, Cosmopolitan is now giving white Americans an opportunity to visually revel in and experiment with embracing a white female-centered family structure. The cover image for Cosmopolitan’s November issue features America’s new chosen “first family” consisting of six white women, including Kris Jenner and her five daughters, three by her first husband, and two by her former husband Bruce Jenner, who has now transitioned into Caitlyn Jenner.

American families are changing, and we should celebrate the fact that the two-parent, nuclear family ideal has gone the way of the floppy disk. But the terms upon which we come to celebrate this family structure are deeply problematic. Why is it appropriate to celebrate Kris Jenner’s new status as the matriarch of a family of daughters, when we have pathologized Black mother-led families unrelentingly since 1965? Just last month, the Atlantic ran a photograph featuring a downtrodden-looking Black woman surrounded by several young men, women and babies, with no father-figure, to accompany Ta-Nehisi Coates’ cover story, “The Black Family in the Age of Mass Incarceration.” Fifty years ago, after Daniel Moynihan’s infamous report on “The Negro Family,” the absence of a father figure in Black households became a mark of cultural pathology. Black mothers bore the cultural refuse of this structural shaming of Black families.

The Moynihan Report induced a deep kind of cultural anxiety and shame about the failure of Black mothers and fathers to get married and stay married. The only balm that seemed to soothe this wound was the fictional Cosby family in the 1980s and the very real Obama family in the early 21st century.

And you can read the rest at Salon.

Update: Commenter SEATAF calls our attention to another contribution in Salon by Professor Cooper that beats even Ta-Nehesi Coates’ Escalator Anecdote for paranoia and megalomania:

“Listen when I talk to you!”: How white entitlement marred my trip to a Ferguson teach-in

On Friday, I was on the train to New York to do a teach-in on Ferguson at NYU. Beats headphones on, lost in thought, peering out the window, I suddenly saw a white hand shoving my work carry-on toward me. Startled, I looked up to see the hand belonged to a white guy, who was haphazardly handling my open bag, with my laptop perched just inside to make space for himself on the seat next to me.

That he wanted the seat on the now full train was not the problem. That he assumed the prerogative to place his hands on my bag, grab it, shove it at me, all while my computer was unsecured and peaking out, infuriated me. I said to him, “Never put your hands on my property.”

His reply: “Well, you should listen when I talk to you.” That line there, the command that when he, whoever he was, spoke, I should automatically listen encapsulates the breadth of the battle against racism we have to fight in this country.

Buoyed by his own entitlement, his own sense of white male somebodiness, this passenger never even considered that he might simply try harder to get my attention before putting his hands on my stuff. His own need to control space, his own sense of entitlement to move anything in his way even if it held something of value to another person, his belief that he had the right to do whatever he needed to do to make the environment conform to his will are all hallmarks of white privilege.

In the reverse scenario, a black man would never get on the train, snatch up a white woman’s bag, and shove it in her face. But then black women are rarely entitled to the courtesies proffered to white women, and black people never presume they are entitled to occupy interracial spaces so aggressively.

To have a white man in 2014 demand that I listen when he speaks is the height of racial disrespect and indignity. To have a white person shove my belongings to the side rather than simply get my attention and ask my permission is an unnecessary level of disrespect, one that conveys yet again that their needs matter more than my own.

Some will argue that I cannot generalize ideas about white entitlement from the action of one jerk on the train. After all, people get into petty squabbles on the train all the time. Let us not forget, however, that the civil rights movement was catalyzed by a squabble over a seat on a bus. I’m no Rosa Parks, of course. But what these connected histories teach us is that the right to occupy public accommodations unharassed is a right black people fought for. Died for. Endured centuries of indignity and white entitlement for. Battles over how we share public space are foundational to the narrative of race in this country.

Still I am struck by the utter cluelessness of this guy on the train, by the way in which snatching up my belongings and shoving them at me seemed like an entirely reasonable thing for him to do. Mere seconds after this exchange, he looked at me frantically as he patted his pockets. “I can’t find my cellphone!” He knew I didn’t have it, but what he wanted from me was empathy and, perhaps, assistance. As I fought back the urge to pummel this man, it occurred to me that far too many white people really don’t get how short black America’s collective fuse is in this moment.

This is great stuff compared to humorless dweeb Ta-Nehisi’s depressing downers. The only reason Professor Cooper isn’t a MacArthur Genius must be sexism.

And racism, of course, too. Never forget racism.