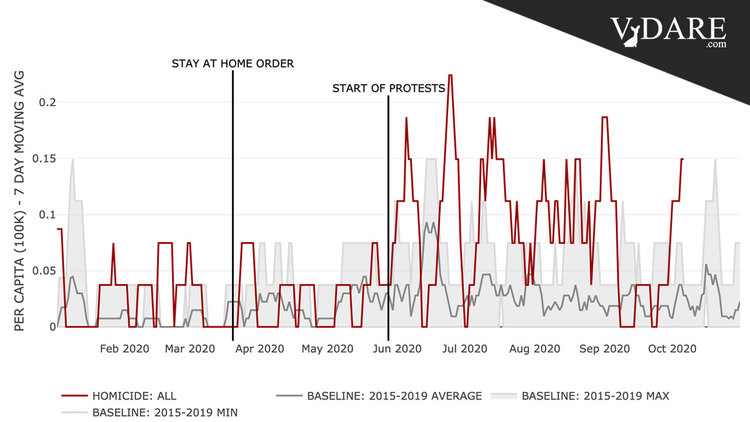 The Minneapolis Effect: After Floyd's Death, Murders Exploded Across The Country

As I’ve been hollering since June, the media-endorsed Racial Reckoning drove up the murder rate hugely. So now the media is trying to palm off the blame on the pandemic. I’m sure it contributed in some complex fashion, but the obvious main cause was the George Floyd mourning process. A detailed analysis of the timing shows that the explosion in murders followed the fentanyl-assisted death of George Floyd on May 25, 2020. From the U. of Pennsylvania’s interactive website City Crime Stats: The red line if 2020’s 7 day moving average per capita (100k) for homicides, the gray line is the average for 2015-2019, the pink area is the maximum reached during one of the previous five years.

Here are some more big cities: Chicago’s Bloody Saturday, in which 18 were murdered in 24 hours, happened the weekend after George Floyd’s death on Memorial Day. In formerly strongly policed NYC, in contrast, it apparently took criminals a couple of weeks after George Floyd’s death to figure out they were free to carry guns without much risk of being stopped and frisked. In Los Angeles, which has been surprisingly peaceful over the last decade, it took about a month for murders to reach new peaks, then the killing went on into the fall. In Philadelphia, there was a Chicago-style peak immediately at the end of May. A few other cities where there was a lot of BLM and/or Antifa activity: Milwaukee saw a lot of killings during the initial George Floyd mourning process, but things kind of calmed down (by Milwaukee’s standard of calmness) until the August 23rd police shooting of Jacob Blake in nearby Kenosha. Portland had a calm spring, then had a lot of murders in the later summer as Antifa riots ground on. But, yeah, the main reason for the huge increase in murders in 2020 was the Racial Reckoning.