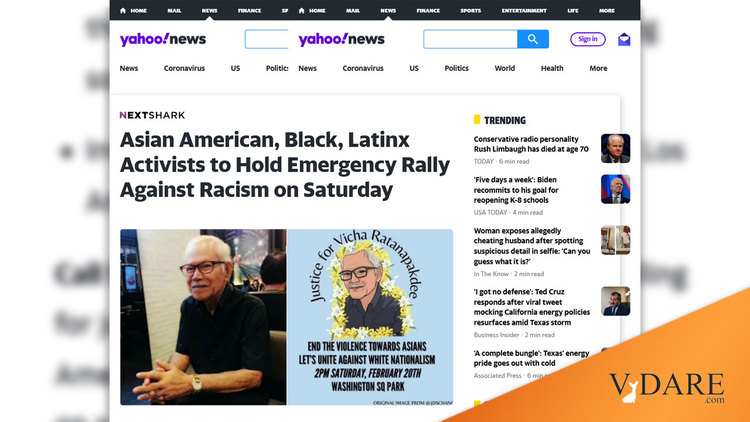 Coalition of the Fringes: Asians Join With Blacks To Protest "Racism" AKA Black Attacks On Asians

Earlier: Everything Bad That Blacks Do, Like Knock Over Old Asians, Will be Blamed On Trump and/or Covid Forever and Fellow Asians: You Must Blame Whites For Black Attacks On Our Elders

Activists from the Black, Latinx and Asian American community will hold an emergency rally in New York City on Saturday in response to the string of violent racist attacks against Asians. …

“The current justice system is pitting Black and Asian communities against one another, just like how news sources did during the L.A. Riots,” Rohan Zhou-Lee, one of the organizers of the rally who is of Black and Asian descent, said. “We can fight Anti-Asian and Anti-Black hate at the same time.”

“All this extrajudicial violence has killed people of color indiscriminately,” Zhou-Lee, who is also part of the LGBTQ+ community, added. “We have to imagine a new world of justice rooted in compassion, not a system built on the slavery of Africans, the genocide of the Indigenous, the exploited labor of Asians, and the lynching of all the above.”

The gathering on Saturday is free and open to the public, but wearing a mask and practicing social distancing is required. …

The rally will also seek justice for Jennifer Laude, a transgender Filipina killed by a U.S. Marine in 2014. Her killer, Joseph Scott Pemberton, was given an absolute pardon by Philippine President Rodrigo Duterte in September 2020.