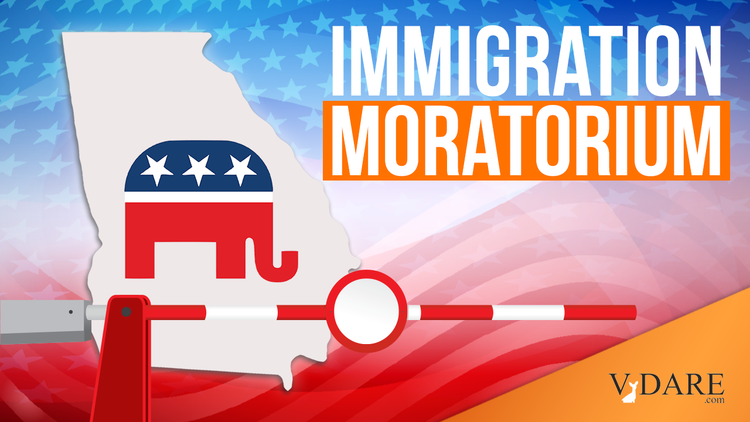 Lost in the Summer of George Floyd Riots was an incredibly important bit of news out of Georgia, where the Platform of the Georgia Republican Party went full VDARE.com and called for a full immigration moratorium:

The Georgia Republican Party is set to pass a resolution asking President Trump to impose a full immigration moratorium while about 30 million Americans remain jobless due to the Chinese coronavirus crisis.

Now, the Georgia GOP is set to be the first state party to support a full immigration moratorium. Currently, Georgia has an unemployment rate of nearly 12 percent—only slightly lower than the national average.

WHEREAS, President Donald J. Trump has issued an executive order limiting immigration into our country during the present health and economic crisis; [Emphasis added]

NOW THEREFORE BE IT RESOLVED that the Georgia Republican Party commends and supports President Donald J. Trump’s leadership in protecting American jobs during the pandemic by restricting immigration during the present health and economic crisis. [Emphasis added]

BE IT FURTHER RESOLVED that the Georgia Republican Party urges President Trump to issue a second executive order that removes the various special interest exceptions to the first executive order and shall strictly limit new immigration visas until the economy reaches its pre-pandemic unemployment rate of no greater than 3.5 percent. [Emphasis added]

Set to be passed this week, the urge for an immigration moratorium has overwhelming support, about 93 percent, from members who responded to a poll of party delegates.

The resolution is the first time in recent memory that a state Republican Party has joined the overwhelming majority of the GOP electorate in supporting reductions and a halt on immigration. [Georgia GOP Urges for Full Immigration Moratorium with Millions Jobless, by John Binder, Breitbart.com, June 16, 2020]

The good news is I can confirm the resolution passed—it can be seen on the official Georgia GOP website [https://gagop.org/2020resolutions] put there by GA GOP Vice-Chair Brant Frost. Also note point 14 of the GA GOP platform:

One party wants to totally open up America’s borders, engage in unilateral amnesty for the 25-30 million illegal aliens in the USA and enable mass refugee resettlement; and as we can see from the GOP in Georgia, the other political party appears ready to fight for the Historic American Nation.

As 2020 comes to a close, with uncertainty still surrounding the outcome of the 2020 POTUS election (and an early 2021 runoff for two U.S. Senate seats in Georgia), let us find hope in knowing American patriots having finally started to salvage something out of the wreck of this great republic.

Introducing the concept of a total immigration moratorium as a resolution for the state GOP is a powerful reminder the good people who vote Republican don’t want to see their state become just another Colorado, California, or Virginia.

Surrendering to the Left means losing not just your country, but your freedoms. The only way to fight this is with an immigration moratorium, so the Left can't import millions to disenfranchise you today and enact laws to ensure your children have no tomorrow.

For our posterity, indeed.