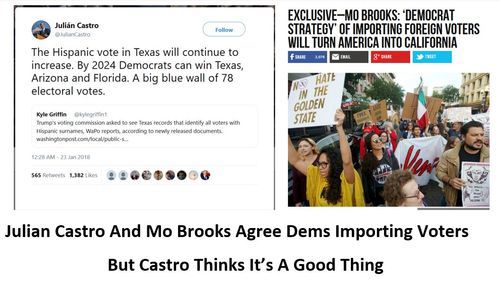 Morris "Mo" Brooks, a Republican representative from Alabama,  speaks truth to power about the  demographic war against the American people.  Bravo to Brooks,  a sitting U.S. congressman with an A+ from Numbers USA, for speaking out on this.

A lot of Republicans don't want to face this issue, but Congressman Brooks is speaking out on it.

Brooks said:
The Democrats have seen how [mass immigration] affects political power, regardless of their ability to support themselves in our country. Hopefully, from [the Democrat] vantage point, [immigrants] will be dependent on welfare, which as soon as possible, as soon as they can be registered to vote, turns them into a dependable Democrat voter. And they hope to do the same thing they’ve done in California to the rest of the country and quite frankly, it’s a pretty smart strategy on their part if the goal is political power. [Emphasis added]

If you don’t care about American lives that are lost in the process, if you discard the lives of American men, women, and children … that impact you’ve seen in California has now spread to states like Arizona, New Mexico, Nevada, Colorado … even perhaps on Texas, where we had a surprisingly close senatorial race last year. That’s in large part because the Democrat strategy of trying to import voters, who can be dependent on welfare and who can be relied on to vote Democrat. People who want to vote for a living, rather than work for a living. [Emphasis added]

Why do you think the Democrats oppose spending 5 billion dollars, pocket change in a federal budget, on a border barrier?

Brooks also said the Democrats’ opposition to barriers and walls at the U.S.-Mexico border to stop illegal immigration is not based in reality.

“To take the position that the Democrats have taken has to fly in the face of humanity’s history because walls have been constructed to protect those on the inside of those walls for thousands of years at cities, states, and nations around the world,” Brooks said. “Israel being a good example. Their walls are substantial. I have personally observed them. And they stop about 99 percent of illegal immigration from one side of the wall to the other. That’s pretty … effective and it saves hundreds of billions of dollars in taxpayer money.”

As Breitbart News has extensively reported, the U.S. is on track to import about 15 million new foreign-born voters in the next two decades should current legal immigration levels continue. Those 15 million new foreign-born voters include about eight million foreign voters who will arrive in the country through the process known as “chain migration,” whereby newly naturalized citizens can bring an unlimited number of foreign relatives to the U.S.

And there are significant political results of this mass immigration.

Additionally, congressional districts with large foreign-born populations have become strongholds for Democrats, giving them near electoral dominance. This was most recently evident in the 2018 midterm elections where Orange County, California — a once conservative region of the state — elected all Democrats, as the demographics of the county have shifted due to mass immigration.

Congressional districts with the largest foreign-born populations in the country, like New York’s 14th District where the foreign population is nearing 50 percent, elected some of the most far-left Democrat candidates, Breitbart News noted.

The article refers to James Gimpel, a researcher who discovered what we've been saying here at VDARE.COM for years.

It all make sense when you break it down:

Do you think this is all accidental?

Democrats like former San Antonio, Texas mayor Julian Castro admit that mass immigration to the U.S. will result in Democrat dominance for generations in swing states.

The article links to Castro's triumphant tweet on the subject, which boasts that

The Hispanic vote in Texas will continue to increase. By 2024 Democrats can win Texas, Arizona and Florida. A big blue wall of 78 electoral votes.

The Hispanic vote in Texas will continue to increase. By 2024 Democrats can win Texas, Arizona and Florida. A big blue wall of 78 electoral votes. https://t.co/6FT0NJyjyP

And we keep bringing more in...

Every year the U.S. admits more than 1.5 million foreign nationals, with the vast majority deriving from chain migration. In 2017, the foreign-born population reached a record high of 44.5 million. By 2023, the Center for Immigration Studies estimates that the legal and illegal immigrant population of the U.S. will make up nearly 15 percent of the entire U.S. population.

Kudos to Representative Brooks for speaking out.  May more Republican representatives do so.  And may this knowledge bring about a change in policy.