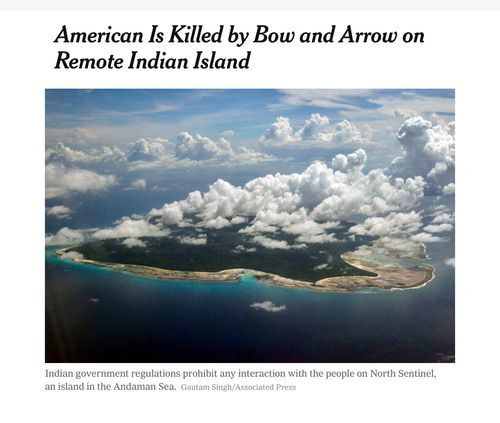 The Ultimate Anti-Globalists: The North Sentinelese

By ASHOK SHARMA, 51 minutes ago

NEW DELHI (AP) — An American is believed to have been killed by an isolated Indian island tribe known to fire at outsiders with bows and arrows, police said on Wednesday.

The Andaman islanders of North Sentinel Island in the Indian Ocean near Burma are pygmy negritos who, I believe, are the last known isolated tribe on earth to have their own island. There are other out-of-contact tribes in the Amazon forest and perhaps elsewhere, but the North Sentinelese are noteworthy for having their own distinct territory and successfully defending it with bows and arrows, for example, shooting a National Geographic photographer in the leg while repelling a landing in 1967.

The dead American appears to have been a Christian missionary, a graduate Oral Roberts U.

Visits to the island are heavily restricted by the government.

The Sentinelese people live on their own small forested island and are known to resist all contact with outsiders, often attacking anyone who comes near.

Back in the 1990s the Indian government wanted to land on N. Sentinel and turn it into a plantation, but a Swiss man named George H.J. Weber organized an Internet campaign to leave the Sentinelese alone. He pointed out that when an uncontacted tribe on a larger Andaman Island with an Indian settlement on it had started interacting with Indians in the 1990s, a large fraction of the tribe died of pneumonia and the like within a number of years. The North Sentinelese probably are at least as susceptible to germs from the outside world. I interviewed Weber in 2002. The Indian government eventually gave up plans to contact the Sentinelese.

Poachers are known to fish illegally in the waters around the island, catching turtles and diving for lobsters and sea cucumbers. Tribespeople killed two Indian fishermen in 2006 when their boat broke loose and drifted onto the shore.

After the 2004 tsunami, a helicopter was sent over the island to see if the natives needed rescuing. Stone Age warriors rushed out and shot arrows at the hovering helicopter.

North Sentinel Island is a popular topic on Google Reviews, averaging 3.9/5 stars out on 3,616 posts, although not on Yelp for some reason: