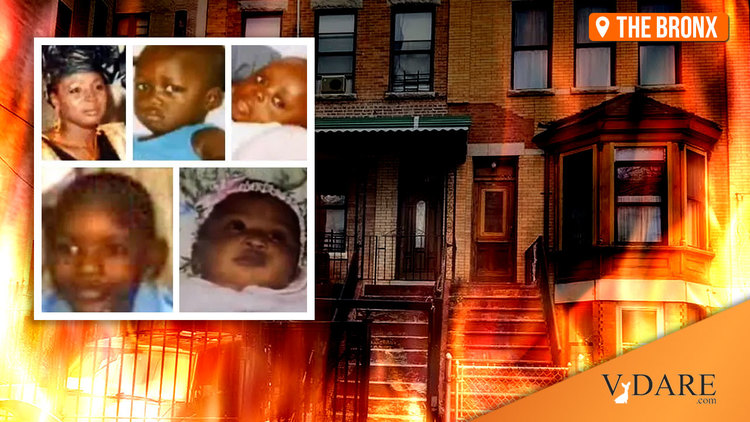 Remembering An Earlier (2007) Immigrant Mass Casualty Fire In The Bronx

Earlier by Nicholas Stix: Bronx Mass Casualty Event Was An Immigrant Fire, But The Media Doesn't Want You To Know

Sunday’s fire, above, reminded some people of another mass casualty fire in the Bronx from March 2007, when one adult and three children perished in a private house that was home to 22 Moslems (17 of them children), all related.

In 2007, Brenda Walker noted this story on VDARE.com, citing PajamasMedia blogger Daniel Rusin, who reported on the

tragic Bronx house fire that killed ten people on March 7, 2007. Moussa Magassa, a naturalized U.S. citizen from Mali who lost five of his children in the blaze, was discovered to have two wives living a floor apart. A subsequent investigation by the New York Times found polygamy to be an open secret in his immigrant community, with agencies that serve it adhering to a policy of ”don’t ask, don’t tell.”

Instead of being prosecuted for bigamy, for causing the situation that led to so many deaths, or having his immigration status investigated, the husband was treated like a “victim” by the New York media and politicians [Space heater blamed in Bronx fire, by Jim Fitzgerald, Associated Press/Seattle Times, originally published March 9, 2007 at 12:00 a.m., updated March 9, 2007]

In 2007, Bill O'Reilly got a floor plan of the death house, and wrote

Let me ask you a direct question. Is it compassionate for New York, a sanctuary city, to allow 17 children to live in a dumpy tenement with five adults? Twenty-two people sharing three small bathrooms and six tiny bedrooms? Is that compassionate?

The building had poor heat, no fire escapes, no sprinklers. Yet social services didn't visit the dwelling, because the city of New York has a don't ask policy toward all foreign born residents.

So the next time you hear the compassion crowd bloviate, show them pictures of people dying in the Arizona desert and being buried here in New York City.

David Brock's thought police at MediaMatters have already condemned O'Reilly for saying this, and Keith Olberman has awarded him a "Worst Person" gold medal for saying this, so he must be doing something right.