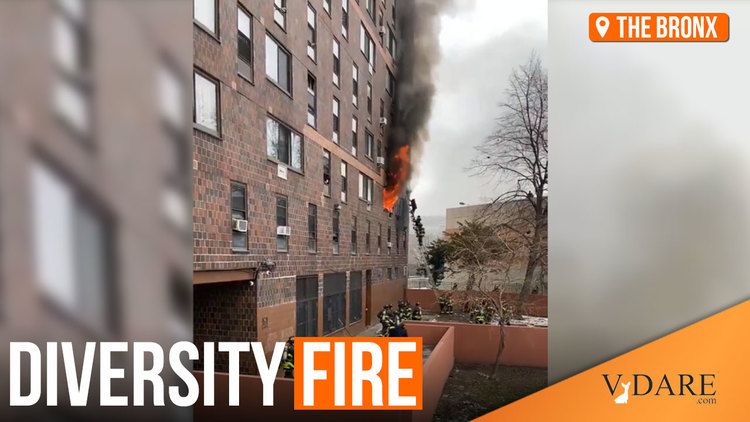 Bronx Mass Casualty Event Was An Immigrant Fire, But The Media Doesn't Want You To Know

On January 9, a fire killed eight kids and nine adults in an apartment building at 333 East 181st Street in the Bronx. At least 33 people were treated, with eight still being hospitalized.

Space heaters that had been running 24/7 for days caught fire in a duplex apartment, and when the father, Mamadou Wague, got his eight children and wife out, he left the apartment door wide open. Someone from his family or another also left a stairwell door wide open, and the smoke got sucked through the open doors, which caused all the deaths, injuries, and destruction.

Fire Commissioner Daniel Nigro was ready with a cover-up on the day of the fire: The doors malfunctioned.

The doors functioned fine, until one or more African “immigrants,” living high off the hog off of whites, didn’t bother to close them.

Stricken Mamadou Wague, 47, said he didn’t even realize the door was left open until he was told about it by fire officials later. [N.S.: Note the passive voice.]

Authorities said earlier Monday that the apartment door was supposed to be self-closing but may have "malfunctioned," sending smoke soaring through the 19-story structure and killing at least 17 people.

[N.S.: New York actually passed a law in 2018 mandating that all apartment doors in structures with three or more units have to be automatically self-closing.]

“When you push the door all the way to the edge, it didn’t close by itself," said Wague, who was in the apartment with his wife and eight kids when the fire started.

“It’s very sad. I don’t even remember the door staying open because all I could think about was getting everybody out," the dad said.

Well, there you have it. How can you expect someone who’s trying to save his own family, which has caused a fire, from caring about whether anyone else lives or dies?

By the way, Mamadou Wague did not have the excuse that his luxury duplex was being cheated out of heat, which happens in many public housing projects in the city. But he just wasn’t getting the sweltering heat he was used to in Gambia.

Many of those in the building were Muslim immigrants from the West African nation of The Gambia. The country's ambassador told CNN the building had been a beloved home for many such immigrants over the years.

“I think a lot of Gambians who came here, they stayed there before they moved anywhere else. This was kind of a first port of call, this building. It’s a building Gambians have a lot of attachment to," said Ambassador Dawda Docka Fadera, who traveled from Washington to New York after learning of the fire.

The families in the apartment complex and neighborhood told CNN they were devastated. Some are still searching for loved ones, and all are desperate for answers.

Media stories emphasized the doors fairy tale, claimed that the building had not been properly maintained, and fabulated that the smoke alarms hadn’t worked (they worked just fine). They were clearly setting the stage for gazillion-dollar lawsuits, in which the same grifters who have been sponging off of white American taxpayers to the tune of millions will enrich themselves to the tune of additional millions, including Mamadou Wague.

Daisy Mitchell, a 10th-floor resident who had just moved in to the building, was one of those who fled to safety. She told CNN’s Brianna Keilar her husband first smelled smoke and noticed the fire.

“The alarm was going off for a while so I didn’t pay it no mind," she said. "Then, when he opened the door and I went out there, I passed out — it was devastating, it was like really scary."

“I went to the stairs, I opened the door, it just blew me back [to] the house. If I’d stayed out there for another three seconds, I would have been gone too."

It was common for fire alarms to go off in the building, 10th-floor resident Chanasia Hunter told CNN affiliate WABC.

“So, when you don’t know that it’s a fire, like, you know, how would you supposed to know if it’s a fire or if it’s always going off?" said Hunter, adding she got a call from a resident on the third floor warning her of the fire, then a knock on her door telling her and her family to get out….

[Tenant Karen Dejesus said] “You’re being trapped somewhere. As you see, we have no fire escapes, obviously the building was not fireproof like we thought it was.”

All of the deaths were from smoke inhalation, due to tenants’ negligence. Nobody burned up, so I suppose the building remained within the definition of “fireproof.”

However, no building can be adequately protected against primitive, ghetto people.

New York City has underscored that illegal aliens from the building have nothing to fear from ICE; the city will break immigration law, as it always does.