Refugee Resettlement Watch's Ann Corcoran, who has been reporting on refugees in Idaho,  got a nasty lawyer's letter from some rural journal in the Gem State, claiming "copyright infringement".  She writes, in her weekly roundup, that :

Idaho controversy was the star of the week!

And, I definitely didn’t want to miss this one because the controversy we have been reporting on from Twin Falls, Idaho has brought new readers in by the droves!  Much to my surprise, the readers most interested in the Idaho refugee controversy were from Germany!

If you missed it, one interesting turn of events from Twin Falls is that a lawyer for the local newspaper told me I must remove the text I had snipped (here and here).  You know this can’t be for commercial and economic reasons because I bet we sent them a boatload of readers (to see their advertisements).

In case you hadn’t noticed, we don’t make a dime from our work of writing and reporting on refugee controversies here and around the world, so they can hardly say they were economically hurt. Copyright law does allow some use of others’ work for the purpose of commentary, and that is what bloggers do!

CLEARLY we hit a nerve!  Clearly, the newspaper in Twin Falls is biased in favor of changing Idaho by adding diversity, why?  Wouldn’t you think a newspaper would be happy with controversy and public discussion, doesn’t that sell papers?  Maybe they want to silence regular American citizens like me!

Or, could there be some other reason they have an interest in tamping down the controversy about more refugees coming to “Magic Valley” Idaho?  Who is the paper really working for?  We will be trying to find out!

Don’t miss my latest on Idaho here (what citizens need to do!)  and here (meatpacker coming to Boise explains need for cheap, captive! immigrant labor).  Follow the money!

So, without further ado here are our Top Three posts from last week (Top daily posts are in the right hand side bar).  The Idaho news was the top story by a mile!

More on the Idaho thing in a later post:

Imagine what a nerve we must have struck to cause a newspaper editor in Idaho to spend money and time attempting to silence a citizen blogger nearly 2,000 miles away.

Almost every day for eight years I have researched the Refugee Resettlement Program of the UN/US State Department as a completely charitable endeavor so that just regular folks in America might know what is being done to their communities.

We have been extremely careful to give attribution and urge readers to see the original article when we snip news articles on which we comment.

And now, over 6,600 posts later, along comes an editor of a small city paper who calls me a “thief” in print as if it wasn’t enough to hire an attorney to send me a letter.

Imagine spending even a minute trying to silence a blogger!

What the heck are they hiding in Magic Valley, Idaho?  Maybe the newspaper there should do as much research as I have on how the secretive Refugee Admissions program benefits a few big businesses and then tell Idahoans the truth because they, taxpaying citizens, have every right to know who is changing their communities and why!

Click here to read all about me in: Stealing the News.

You can email Magic Valley editor Matt Christensen to find out why he's doing this. I considered reading his editorial to find out, but was greeted by this screen below, so didn't bother. I'm always tempted to lie on the surveys, but perhaps that counts as stealing, too. 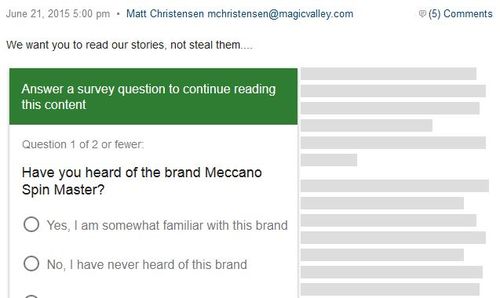