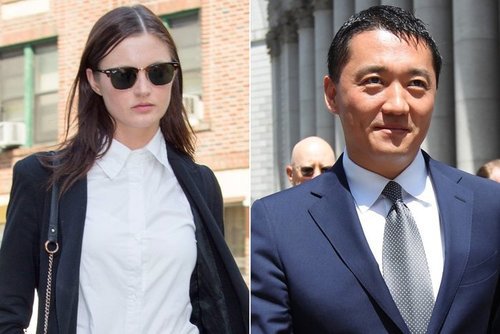 Wall Street Sex: What A Falling Off Was There

Nature imitates art, with differences that illustrate how tragically far our civilization has declined over the past thirty years.

On Wall Street, a Chinese-American Master of the Universe has his way with a female employee.

The pretty Swedish underling who sued her Wall Street boss, saying he pressured her into having sex and fired her when she cut him off, took the stand in Manhattan federal court Monday—and tearfully told jurors she was terrified that he would fire her and revoke her visa.

“We went back to the outside of my apartment, and he wanted to come up for tea,” Hanna Bouveng, 25, said, recalling her first hookup with Benjamin Wey, 43.  [“Then he started to undress me”: Underling’s “affair” with financier by Josh Saul; New York Post, June 23rd 2015.]

But this is 2015, when “No” means “Maybe,” “Maybe” means “Yes,” and “Yes” means a zillion-dollar “harassment” lawsuit, provided only that you can squeeze out some crocodile tears on the witness stand in a federal courtroom.

Wey fired Bouveng after finding her boyfriend naked in bed at the Tribeca apartment [which Wey had been paying for!—JD].

Wey has said he and Bouveng never had sex. His lawyer has said her claims amount to extortion.

Bouveng filed the $850 million lawsuit against him in July 2014 claiming sexual harassment, unlawful retaliation and defamation.

She retakes the stand Tuesday.

Off-duty Wall Street was so much more civilized back in the 1980s, yin and yang more harmoniously in balance.

Left to himself and his glass of tonic water, William brooded on the arrests. Jeffrey and Lenny had been charged with offenses which seemed to him petty and technical: stock parking, insider trading. Things everybody did, which no-one thought wrong. They were decent men, he knew them both well from his early days in New York. Where was the sense in it?

These thoughts were interrupted by the awareness of a girl standing a few feet away. Clearly one of those who had consoled themselves for the firm’s woes with drink, the girl was looking at him slightly cross-eyed, and swaying perceptibly from side to side. William thought she would probably fall over before the evening was through. He recognized the girl. She rejoiced in the very mellifluous name of Mindy Gallone, and she was a trading assistant on the Mortgage desk. Twenty-two or three, Mindy was pretty, in a domestic rather than glamorous way. Her skin was creamy and unmarked, her features regular under a tumble of blonde hair. She had a trim body and long slender legs that she showed to advantage by wearing miniskirts all the time. William had never heard anything bad of her, and had the impression, from occasional encounters, that she was demure and respectable. But now, seeing him take notice of her, she giggled and blushed.

“Hello, Mindy. You look as if you’ve drunk too much.”

“Yes. I probably have. It’s all right.” Mindy giggled again.

“Would you like me to call a car so you can go home?”

William had for some days been nursing an idea, without coming to any definite resolution about it. He felt certain that matters would come to a head soon with Margaret, and wanted to feel quite sure of himself. He had thought of enlisting the services of a high-class call-girl agency for the purpose; but the sight of Mindy—pretty, drunk, and obviously thrilled to be talking to a Managing Director with a net worth approaching that of Africa—reminded him how easy things were for him.

“You really don’t look too steady on your feet,” he said. “Would you like to go to my office and sit down a while?”  [Fire from the Sun, Chapter 54.]

No 1980s Wall Street gal would have thought of filing a lawsuit based on the sequel.  Why go to the trouble, when a few well-placed words can achieve a perfectly satisfactory recompense with much less bother?

The following Monday Mindy called him on his private line, which one of the mortgage traders knew.

The girl laughed. “No need to be sorry. I guess I let myself in for it. But flowers would have been nice.”

William went over to Tiffany’s at lunch time and bought an exquisite threaded-gold necklace with diamonds at intervals on it and a diamond pendant, twenty-eight thousand dollars, and sent it to her by inter-office mail. “I don’t believe it,” the girl breathed, calling him back. “Don’t believe it. Thank you, thank you, oh thank you.”

(That passage seems to have been a favorite with female readers of Fire from the Sun.)