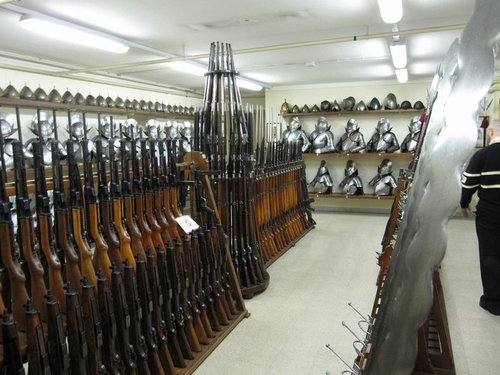 Pope Francis has had quite the liberal week with his outspoken comments against national sovereignty and firearms.

Last Wednesday the Catholic monarch complained that Europe was insufficiently welcoming to the people of Africa (population 1 billion) and beyond who are invading by the thousands. (One estimate is over 130,000 illegals have arrived uninvited to Europe so far this year.)

Below, the anti-borders pope visited the Italian island of Lampedusa in 2013 to “highlight the suffering of migrants.” The island has been overrun with African illegal aliens because of its proximity to Tunisia and Libya.

Pope Francis on Wednesday called for respect for migrants and suggested that “people and institutions” who close doors to them should seek forgiveness from God.

The pope’s appeal, made at the end of his weekly general audience, came amid growing debate in Europe on how to deal with an immigrant crisis that has included clashes at the French-Italian borer between police and migrants.

“I invite you all to ask forgiveness for the persons and the institutions who close the door to these people who are seeking a family, who are seeking to be protected,” he said in unscripted remarks delivered in a somber voice. [. . .]

“Out of curiosity, how many immigrants are there in the Vatican State?” northern Italian broadcaster Radio Padania Libera quoted [Northern League leader Matteo] Salvini as asking.

Then on Sunday, the pope went ballistic against weapons manufacturers, calling them un-Christian.

Whoa. The pope has a substantial Vatican army, the Swiss Guards, who despite their silly medieval outfits, are well armed professional soldiers. Columnist Charles C.W. Cooke noted in a tweet, “His bodyguards use SIG P220 and Glock 19 pistols, Steyr TMPs, and H&K MP5A3 submachine guns. Where do they get them?” ( Their armory is pictured above.)

So the pope is adequately guarded, but he objects to the tools by which others protect themselves. His complaints represent typical liberal hypocrisy and the same old claptrap about guns.

If Francis gets his open-borders fantasy and Europe is opened to unrestricted millions of Africans and Middle Easterners, many of whom are unfriendly Muslims, a lot more weapons will be needed.

People who manufacture weapons or invest in weapons industries are hypocrites if they call themselves Christian, Pope Francis said on Sunday.

Francis issued his toughest condemnation to date of the weapons industry at a rally of thousands of young people at the end of the first day of his trip to the Italian city of Turin.

“If you trust only men you have lost,” he told the young people in a long, rambling talk about war, trust and politics after putting aside his prepared address.

“It makes me think of … people, managers, businessmen who call themselves Christian and they manufacture weapons. That leads to a bit a distrust, doesn’t it?” he said to applause.

He also criticized those who invest in weapons industries, saying “duplicity is the currency of today … they say one thing and do another.”

Francis also built on comments he has made in the past about events during the first and second world wars.

He spoke of the “tragedy of the Shoah,” using the Hebrew term for the Holocaust.

“The great powers had the pictures of the railway lines that brought the trains to the concentration camps like Auschwitz to kill Jews, Christians, homosexuals, everybody. Why didn’t they bomb (the railway lines)?”

Discussing World War One, he spoke of “the great tragedy of Armenia” but did not use the word “genocide”.

Francis sparked a diplomatic row in April calling the massacre of up to 1.5 million Armenians 100 years ago “the first genocide of the 20th century,” prompting Turkey to recall its ambassador to the Vatican.