And now a message from the planet...

China's capital woke up to orange-tinted skies Saturday as the strongest sandstorm so far this year hit the country's north, delaying some flights at Beijing's airport and prompting a dust warning for Seoul.

Air quality is "very bad for the health," China's national weather bureau warned. It said people should cover their mouths when outside and keep doors and windows closed.

China's expanding deserts now cover one-third of the country because of overgrazing, deforestation, urban sprawl and drought. The shifting sands have led to a sharp increase in sandstorms - the grit from which can travel as far as the western United States.

Three out of four reasons named for Red China's increasing desertification are human caused. The People's Republic is home to 1.3 billion residents, which is more than double the number counted in its 1953 census, when the population stood at 582 million.

Meanwhile, the population of the United States also grows rapidly beyond environmental sustainability and will continue to do so into the distant future unless the immigration firehose is stopped. The high Census projection for late in this century shows our country topping the one billion mark in 2089.

Red China has done us an odd sort of favor by demonstrating one symptom of what overpopulation can do. It's certainly wrong to hope that the supposedly pro-environment Obama administration could learn something from the Chinese and other examples of overusing natural resources. The Obama pursuit of an amnesty which would eventually add tens of millions more people via chain migration indicates willful ignorance of environmental consequences of overpopulation plus a severe lack of responsibility toward future generations.

Below, a girl in Tiananmen Square experiences a recent sandstorm. 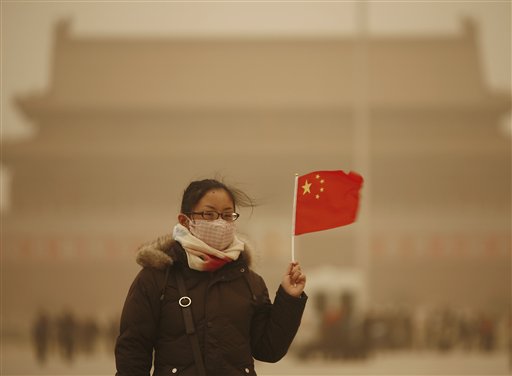