For ages, the Obama crew has been claiming to screen Muslim refugees super-thoroughly in a process that takes years. Then a few weeks ago, the government announced a “surge” program that would magically reduce the process to a mere three months, and the new quickie rapefugees began to arrive.

Last winter the administration did announce its intentions to increase the intake of Syrian Muslims by a large degree, so we shouldn’t be surprised. Keep in mind that FBI Director Comey has said that Syrians cannot be adequately screened because the US government does not have access to Syria’s databases of crime and such. 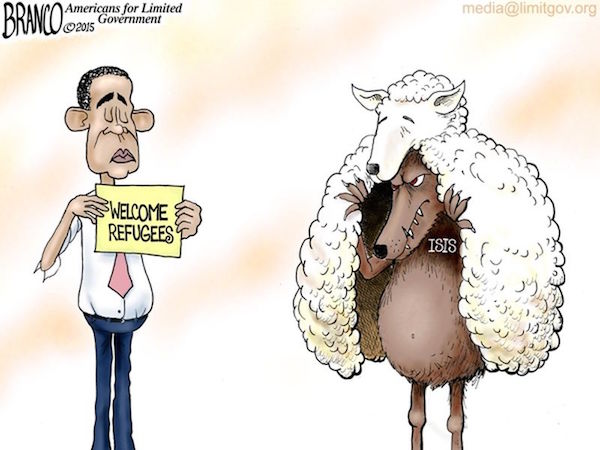 It is totally irresponsible of the administration to bring so many unemployable and uneducated (65 percent illiterate!) Muslims — who are not known for their willingness to assimilate to western values. The best we could hope for would be many thousands of quiet welfare receivers, but it’s likely that some number will become dissatisfied and violent in jihad fashion.

Plus, an appalling 93.5 million Americans were out of the workforce in March — how fair is this dodgy policy to them? Some employers will hire refugees just for extra do-gooder diversity points. There’s nothing good about it.

In a move around the standard refugee settlement process in America, the United Nations and the administration are scheming to find other ways to boost the number of Syrians entering the country, from 10,000 this year to possibly 200,000.

U.S. officials, meeting with United Nations human rights officials in Geneva, joined in a project that looks to “alternative safe pathways” to setting Syrian refugees in America and Europe that include pushing colleges and universities to offer tuition programs and encouraging Syrians already in the country to open their homes to those who’ve fled the war-torn Middle East nation.

The plan already has one victory. Last week, the University of Southern California revealed that it is offering five free tuition programs for Syrian refugees, including one in the school’s journalism program.

The effort was revealed Monday in a Center for Immigration Studies post. It quoted a Georgetown University professor and U.N. refugee policy advisor who spelled out the backdoor plan to settle thousands more Syrians past the 10,000 President Obama has pledged to OK this year. Beth Harris, a research professor at Georgetown University and U.N. advisor, even suggested a total of 200,000 at a recent Brookings Institution conference:

“Refugees and government officials are expecting this crisis to last 10 or 15 years. It’s time that we no longer work as business as usual … UNHCR next month is convening a meeting to look at what are being called ‘alternative safe pathways’ for Syrian refugees. Maybe it’s hard for the U.S. to go from 2,000 to 200,000 refugees resettled in a year, but maybe there are ways we can ask our universities to offer scholarships to Syrian students. Maybe we can tweak some of our immigration policies to enable Syrian-Americans who have lived here to bring not only their kids and spouses but their uncles and their grandmothers. There may be ways that we could encourage Syrians to come to the U.S. without going through this laborious, time-consuming process of refugee resettlement.”

The Geneva meeting took place March 30 and CIS had the details on what occurred.

The U.N. High Commissioner for Refugees, Filippo Grandi, told representatives of 92 nations that they needed to explore “alternative avenues” for the admission of Syrian refugees. He said:

“These pathways can take many forms: not only resettlement, but also more flexible mechanisms for family reunification, including extended family members, labor mobility schemes, student visa and scholarships, as well as visa for medical reasons. Resettlement needs vastly outstrip the places that have been made available so far… But humanitarian and student visa, job permits and family reunification would represent safe avenues of admission for many other refugees as well.” At the end of the meeting, he said that many countries had made commitments, among them:

— Increasing the number of resettlement and humanitarian admission places.

— Removing administrative barriers and simplify processes to facilitate and expedite the admission of Syrian refugees. — Using resources provided by the private sector in order to create labor mobility schemes for Syrian refugees.

It would be just the latest expansion of benefits for refugees that Americans and other nations already supply. Secrets reported Sunday, for example, that poor refugee children receive more cash payments, food stamps and Social Security than poor American children.