Even Somalis Know the Mexico Border Is a Sieve

It doesn’t bode well for America’s national security when even a backward Somali can figure out that the southern border is a practically a welcome mat for an ambitious jihad gangster. That was the upshot of a recent story from Minnesota where some of the local Somalis are charged with partnering with ISIS to smuggle jihadists through welcoming Mexico north to attack the hated American infidels.

Tucker Carlson and Ralph Peters discussed the case a couple days ago:

TUCKER CARLSON: Four Minnesota residents from a local Somalian community outside Minneapolis will be on trial next month for conspiring with ISIS plotting to carry out possible attacks here in the US. According to federal prosecutors, one of those accused terrorists, Gulec Ali Omar, even conceived a plan to route foreign fighters across the US-Mexican border. All this comes as FBI director James Comey warned of a possible Brussels-style attack in America within the next two years. Watch this:

FBI DIRECTOR JAMES COMEY: We stare at what happened in Brussels and imagine it is our future that we have to work against; that it could be that the threat they’re facing on the continent, increasingly here in the UK, is the threat that we could face two years from now. And we talk a lot, plan a lot, work a lot against that possibility.

CARLSON: It’s an ominous warning, and joining us now with his reactions, Fox News strategic analyst, Lieutenant Colonel Ralph Peters. Colonel, great to see you tonight. Minneapolis yet again the site of an FBI investigation into terrorism. Something has changed in Minneapolis. Whatever happened to Minneapolis nice or Minnesota nice? It didn’t used to be the locus of terror plots. Why is it now?

RALPH PETERS: Well among other things, our immigration policy is so utterly screwed up. How we not only brought in Somalis in very large numbers, we ghettoized them. We allow them to congregate in one area where they don’t have to learn English, they don’t learn American values, they’re subject to hate preachers, most radical forms of Islam, and it’s a little Somalia within the United States.

CARLSON: But for years we brought Scandinavians into Minneapolis and they congregated together and lived in their own neighborhoods and spoke Swedish and Danish and they didn’t plotting terror attacks. What’s the difference?

PETERS: Well they did clog our arteries with a lot of cheese. But very seriously, it really comes down to culture. Scandinavians came over here from European culture. Traditionally, European culture has been our culture and its American derivative. And to be fair, most Muslims have done a fair job of integrating. Some of the Iranian Americans have done a great job. But the Somalis were undereducated or uneducated, practiced a very primitive form of Islam, and again they didn’t get dispersed, they didn’t have to integrate and that’s a fundamental problem.

Speaking of Somali immigration — certainly one of the most wrong-headed government policies ever — WND recently published a very informative graph that well shows the extent of the problem that has continued in a substantial fashion through three administrations: 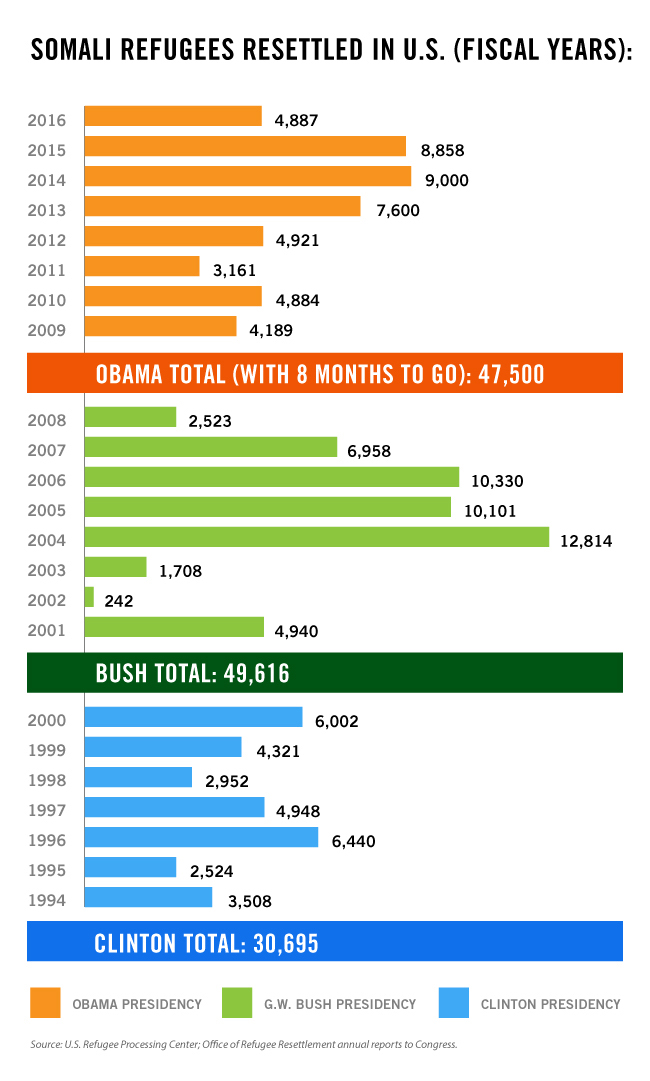 It’s not exactly new news that our enemies have noticed the laxity of American border enforcement. Last June, the ISIS magazine Dabiq suggested a nuke could be transported into the US through Mexico. In December, a couple of Middle Eastern men were caught crossing the border carrying steel cylinders in their backpacks — parts of a jihad engineering project perhaps? ISIS reportedly operates a camp just a few miles from El Paso in the Mexican state of Chihuahua, so they are ready for whatever they have in mind.

Here’s a text report about the Somali case:

One of the American men accused in Minnesota of trying to join the Islamic State group wanted to open up routes from Syria to the U.S. through Mexico, prosecutors said.

Gules Ali Omar told the ISIS members about the route so that it could be used to send members to America to carry out terrorist attacks, prosecutors alleged in a document filed this week.

The document, filed Wednesday, is one of many filed in recent weeks as prosecutors and defense attorneys argue about which evidence should be allowed at the men’s trial, which starts May 9.

The men — Omar, 21; Hamza Naj Ahmed, 21; Mohamed Abdihamid Farah, 22; and Abdirahman Yasin Daud, 22 — have pleaded not guilty to multiple charges, including conspiracy to commit murder outside the U.S.

Prosecutors have said they were part of a group of friends in Minnesota’s Somali community who held secret meetings and plotted to join the Islamic State group.

Five other men have pleaded guilty to one count each of conspiracy to support a foreign terrorist organization. A tenth man charged in the case is at-large, believed to be in Syria.

The government’s document was filed in response to a defense request that prosecutors be barred from introducing evidence about possible attacks in the U.S.

Last week, Daud’s attorney wrote that, absent any specific evidence that his client threatened the United States, any references to discussions about attacks would be prejudicial. To permit such references, as well as references to the Sept. 11 attacks or exhibits that show violent images of war crimes, “would cause the jurors to decide out of fear and contempt alone,” defense attorney Bruce Nestor wrote.

But prosecutors said audio recordings obtained during the investigation show the defendants spoke multiple times about the possibility of attacks in the U.S. Among them, Omar spoke of establishing a route for fighters, Farah spoke of killing an FBI agent and another man who pleaded guilty talked about shooting a homemade rocket at an airplane.

Prosecutors wrote that they should be allowed to “play for the jury the defendants’ own words, in which they discuss the possibility of returning to attack the United States.” They also said the defendants watched videos and gruesome images, which they also want to play for the jury, and that a blanket ban on mentioning the 2001 attacks is inappropriate, noting that Omar had pictures of the burning World Trade Center towers and Osama bin Laden on his cellphone.

The FBI has said about a dozen people have left Minnesota to join militant groups fighting in Syria in recent years. In addition, since 2007 more than 22 men have joined al-Shabab in Somalia.