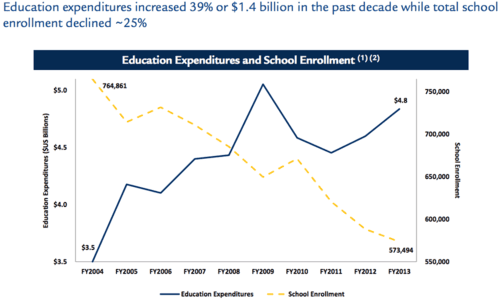 Puerto Rico is a fascinating example of Open Borders in Action. Over the last dozen years, there has apparently been a big surge of Puerto Ricans without government jobs out of Puerto Rico, leaving fewer taxpayers behind to pay the government workers’ salaries. It’s a striking paradox: Puerto Rican left for America back when always the population growing and now they leave when the population shrinking.The above graph is from a report by the Centennial hedge fund offering unpopular suggestions on how they could get paid off, such as by laying off teachers rendered unnecessary by the decline in enrollment.

Puerto Rican teachers are actually pretty cheap — base pay is around $20,000, although the test scores of their students on the Spanish-language version of the federal NAEP are even lower — but Puerto Rican administrators are not. Back on July 1, I reported:

Puerto Rico spends less than half as much as the U.S. average on Instruction: $3,082 in Puerto Rico vs. $6,520 in America, significantly less than any American state. But Puerto Rico spends more than the U.S. average on Total Support Services ($3,757 vs. $3,700). Puerto Rico is especially lavish when it comes to the shifty-sounding subcategories of General Administration ($699 in PR vs. $212 in America) and Other Support Services ($644 vs. $347). PR spends more per student on General Administration than any state in America, trailing only the notorious District of Columbia school system, and more even than DC and all 50 states on the nebulous Other Support Services.

Prestigious private prep schools in Puerto Rico aren’t hugely expensive by, say, Manhattan standards. It’s a little hard to find posted tuition for elite English-language prep schools — a commenter suggests that they price discriminate based upon how much money they think you have — but among ones with a top reputation among English speakers in San Juan or Dorado Beach, Robinson School, which has a boarding school, peaks for 11th-12th graders at $11,595 for day students. Top of the line Spanish language prep schools appear to be in the high four figures, with run of the mill Spanish language private schools around $3,000.

It’s a poor place. (Except if you are a public school administrator, apparently.)