The Amazingly Horrible Test Scores of Students in Puerto Rico 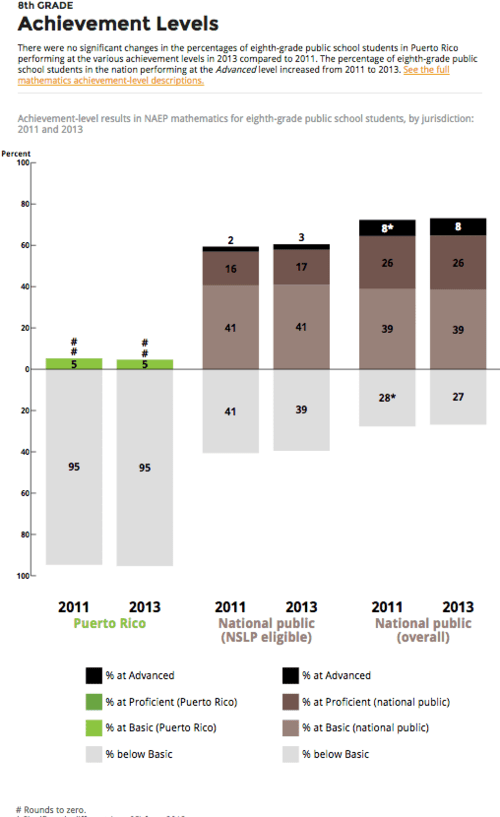 Paul Krugman argued yesterday that Puerto Rico is kind of like West Virginia, Mississippi, and Alabama:

Put it this way: if a region of the United States turns out to be a relatively bad location for production, we don’t expect the population to maintain itself by competing via ultra-low wages; we expect working-age residents to leave for more favorable places. That’s what you see in poor mainland states like West Virginia, which actually looks a fair bit like Puerto Rico in terms of low labor force participation, albeit not quite so much so. (Mississippi and Alabama also have low participation.) … There is much discussion of what’s wrong with Puerto Rico, but maybe we should, at least some of the time, just think of Puerto Rico as an ordinary region of the U.S. …

Okay, but there’s a huge difference in test scores.

The federal government has been administering a special Puerto Rico-customized version of its National Assessment of Educational Progress (NAEP) exam in Spanish to Puerto Rican public school students, and the results have been jaw-droppingly bad.

For example, among Puerto Rican 8th graders tested in mathematics in 2013, 95% scored Below Basic, 5% scored Basic, and (to the limits of rounding) 0% scored Proficient, and 0% scored Advanced. These results were the same in 2011.

In contrast, among American public school students poor enough to be eligible for subsidized school lunches (“NSLP” in the graph above), only 39% scored Below Basic, 41% scored Basic, 17% scored Proficient, and 3% scored Advanced.

Let me repeat, in Puerto Rico in Spanish, 5% are Basic, and zero zip zilch are Proficient, much less Advanced.

Am I misinterpreting something? I thought I must be, but here’s a press release from the Feds confirming what I just said:

The 2013 Spanish-language mathematics assessment marks the first time that Puerto Rico has been able to use NAEP results to establish a valid comparison to the last assessment in 2011. Prior to 2011, the assessment was carefully redesigned to ensure an accurate assessment of students in Puerto Rico. Results from assessments in Puerto Rico in 2003, 2005 and 2007 cannot be compared, in part because of the larger-than-expected number of questions that students either didn’t answer or answered incorrectly, making it difficult to precisely measure student knowledge and skills. The National Center for Education Statistics, which conducts NAEP, administered the NAEP mathematics assessment in 2011. But those results have not been available until now, as it was necessary to replicate the assessment in 2013 to ensure that valid comparisons could be made.

“The ability to accurately measure student performance is essential for improving education,” said Terry Mazany, chairman of the National Assessment Governing Board, which oversees NAEP. “With the support and encouragement of education officials in Puerto Rico, this assessment achieves that goal. This is a great accomplishment and an important step forward for Puerto Rico’s schools and students.”

NAEP assessments report performance using average scores and percentages of students at or above three achievement levels: Basic, Proficient and Advanced. The 2013 assessment results showed that 11 percent of fourth-graders in Puerto Rico and 5 percent of eighth-graders in public schools performed at or above the Basic level; conversely, 89 percent of fourth-graders and 95 percent of eighth-graders scored below that level. The Basic level denotes partial mastery of the knowledge and skills needed for grade-appropriate work. One percent or fewer of students in either grade scored at or above the Proficient level, which denotes solid academic performance. Only a few students scored at the Advanced level.

The sample size for 8th graders was 5,200 students at 120 public schools in the Territory.

Results this abysmal can’t solely be an HBD problem (although it’s an interesting data point in any discussion of hybrid vigor); this has to also be due to a corrupt and incompetent education system in Puerto Rico.

New York Times’ comments aren’t generally very useful for finding out information, but Krugman’s piece did get this comment:

My husband and I have had a house in PR for 24 years. For two of those years we taught English and ESL at Interamericana, the second largest PR university. Our neighbors have children in the public grade schools. In a nutshell: the educational system in PR is a joke!!! Bureaucratic and corrupt. Five examples: (1) In the elementary schools near us if a teacher is sick or absent for any reason, there is no class that day. (2) Trying to get a textbook changed at Interamericana requires about a year or more of bureaucratic shinnanigans (3) A colleague at Interamericana told us that he’d taught in Africa (don’t remember where) for a few years and PR was much worse in terms of bureaucracy and politics. ( (4) The teaching method in PR is for the teacher to stand in front of the class, read from the textbook verbatim, and have the students repeat what he or she read. And I’m not speaking just about English – this goes for all subjects. 5) Interamericana is supposed to be a bi-lingual iniversity. In practice, this means the textbooks are in English, the professor reads the Spanish translation aloud, and the usually minimal discussion is in Spanish. …

Puerto Rico spends less than half as much as the U.S. average on Instruction: $3,082 in Puerto Rico vs. $6,520 in America, significantly less than any American state. But Puerto Rico spends more than the U.S. average on Total Support Services ($3,757 vs. $3,700). Puerto Rico is especially lavish when it comes to the shifty-sounding subcategories of General Administration ($699 in PR vs. $212 in America) and Other Support Services ($644 vs. $347). PR spends more per student on General Administration than any state in America, trailing only the notorious District of Columbia school system, and more even than DC and all 50 states on the nebulous Other Support Services.

Being a schoolteacher apparently doesn’t pay well in PR, but it looks like a job cooking the books somewhere in the K-12 bureaucracy could be lucrative.

The NAEP scores for Puerto Rico and the U.S. are for just public school students.

A higher percentage of young people in Puerto Rico attend private schools than in the U.S. The NAEP reported:

In Puerto Rico, about 23 percent of students in kindergarten through 12th grade attended private schools as of the 2011-2012 school year, compared with 10 percent in the United States. Puerto Rico results are not part of the results reported for the NAEP national sample.

So that accounts for part of the gap.

It’s clear that Puerto Ricans consider their own public schools to be terrible and that anybody who can afford private school should get out. The NAEP press release mentions that 100% of Puerto Rican public school students are eligible for subsidized school lunches versus about 50% in the U.S. Heck, Oscar-winner Benicio Del Toro’s lawyer father didn’t just send him to private school, they sent him to a boarding school in Pennsylvania.

Still, these Puerto Rican public school scores are so catastrophic that I also wouldn’t rule out active sabotage by teachers, such as giving students an anti-pep talk, for some local labor reason. For example, a PISA score from Austria was low a couple of tests ago because the teacher’s union told teachers to tell students not to bother working hard on the test. But the diminishment of the Austrian PISA score wasn’t anywhere near this bad. And Puerto Rico students got exactly the same scores in 2011 and 2013.

And here’s Jason Malloy’s meta-analysis of studies of Puerto Rican cognitive performance over the last 90 years.