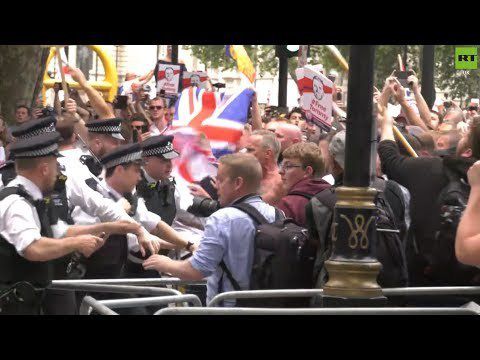 Protests against Tommy Robinson's incarceration have been very undercovered, but they're real. See Police officers hurt at 'free Tommy Robinson' protest, June 9, 2018 and these two videos.

As soon as they could find signs of "racism", however, the Independent produced a report, with some quotes from supporters of Robinson:

Gerard Batten MEP, the leader of Ukip, was among high-profile speakers at the London rally and later condemned violence committed by “a few idiots and provocateurs”.

Calling Robinson a “political prisoner”, he asked the crowd they had to choose whether the “submit or resist” to Islam.

Geert Wilders, the leader of the Dutch opposition and leader of the far-right Party for Freedom, also spoke in Robinson’s support, as did the failed Ukip leadership candidate and For Britain group leader Anne Marie Waters.

The speeches were presided over by former Breitbart London editor Raheem Kassam, who read a message from his former boss Steve Bannon expressing support for Robinson.