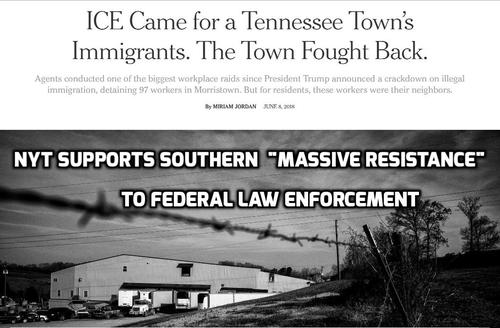 The New York Times's Miriam Jordan [Email her] who has been covering immigration for years, always from the point of view of either the employer (she used to work for the WSJ) or the immigrant, has a story in today's Times about a successful raid in Tennessee that baggged a number of illegals.

ICE Came for a Tennessee Town’s Immigrants. The Town Fought Back.

Agents conducted one of the biggest workplace raids since President Trump announced a crackdown on
illegal immigration, detaining 97 workers in Morristown. But for residents, these workers were their neighbors.

I assume that the Tennesseeans who are supporting these illegal families are doing it because they're what are called "white Christians".

For days, the church was a beehive of activity. Children, including many who missed school after the raid, were entertained by volunteers.

MORRISTOWN, Tenn. — One morning in April, federal immigration agents swept into a meatpacking plant in this northeastern Tennessee manufacturing town, launching one of the biggest workplace raids since President Trump took office with a pledge to crack down on illegal immigration.

Dozens of panicked workers fled in every direction, some wedging themselves between beef carcasses or crouching under bloody butcher tables. About 100 workers, including at least one American citizen, were rounded up — every Latino employee at the plant, it turned out, save a man who had hidden in a freezer.

The MSM always panics at the thought of an American citizen or legal immigrant being briefly detained in an immigration raid, but look at that 100-1 ratio.

Here's quote from one of the locals who supports the illegals, not entirely out of Christian motives:

Marshall Ramsey, president of the Morristown Area Chamber of Commerce: We don’t get into immigration issues. As long as they are pulling their weight as workers, that is what we appreciate. We’re very proud of our diverse heritage. My wife is actually a seventh-grade schoolteacher here in town and about 50 percent of her class is Hispanic. She raves about parent-teacher conferences. The parents show up. The kids know that the parents have high expectations of them. The parents feel like the kids have been given an opportunity.

So Marshall Ramsey of the Morristown Chamber of Commerce [Email him] supports illegal immigrants as long as they're pulling their weight by working illegally for a Morristown employer, and spending their money by shopping with a Morristown merchant. Color me surprised.

I don't know how much of his income Ramsey personally derives from illegals, but according to his own statement, his wife the teacher gets 50 percent of her income from illegals.  And as for the Hispanic parents who feel that "the kids have been given an opportunity", they haven't--it's been stolen from American taxpayers, like their jobs have been stolen from American workers.

That being said, the point remains that the NYT is endorsing (a) Southern "Massive Resistance" to a Federal law enforcement program, and (b) white Southern Christians.

Another miracle of the Age of Trump!