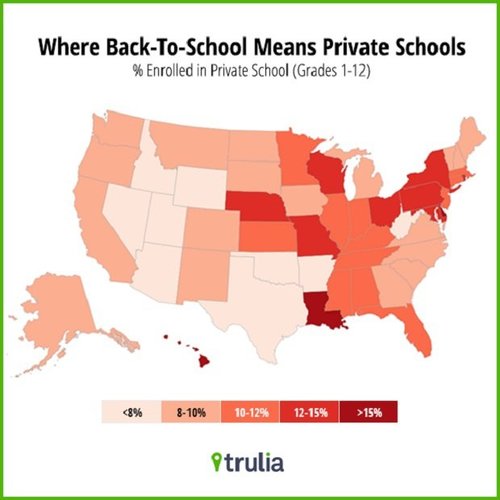 Among the 100 largest U.S. metros, private school enrollment tends to be highest in places that are richer, more educated, and more Catholic, though less Hispanic, than the national average. Among the top 10 metros for private school enrollment, income is particularly high in Honolulu, San Francisco, Philadelphia, and Wilmington. New Orleans, Philadelphia, and Cleveland also have a high share of Catholics. Finally, in all of these metros except San Francisco, the Hispanic population share is low.

Besides Catholics, having a lot of blacks drives up private school enrollment for white flight reasons. New Orleans, Honolulu, and San Francisco all have Old Money and SF has New Money (and Timeless Money) too.

On the flip side, the 10 metros where private school enrollment is lowest are in the Southwest or West. All except Salt Lake City have large Hispanic populations—a reminder that private schools are popular among non-Hispanic Catholics, but not among Hispanic Catholics. Additionally, Fresno, El Paso, and Bakersfield are all relatively low income.

In my SoCal experience, a surprising fraction of Catholic school kids with Spanish surnames turn out to be Filipino. The Catholic hierarchy demands more Latin American immigration, but they ought to keep in mind that Mexicans don’t send their kids to Catholic schools much. I don’t know whether it’s Mexican anti-clericalism or, more likely, Mexicans just aren’t all that much into this whole investing in your children’s education thing.

Colorado City, AZ is a polygamous Fundamentalist LDS town. I’d be surprised if the patriarchs are paying for all that private schooling out of their own pockets. They usually have multiple scams going to fleece the state and federal taxpayers.

Kolko even goes on to consider something that everybody talks about in their own lives but never seems to get quantified in the press:

Time To Do the Math: Do Private Schools or Great Public School Districts Cost More?

Like most things with active markets, it turns out to be something of a toss-up, but Kolko has some interesting numbers such as:

So let’s call out 10 ZIP codes with low private school enrollment, but where families have higher incomes, parents are highly educated, and the school district has an average GreatSchools rating of 8 or more (This list is for illustration only because small sample sizes mean high margins of error.)

Chappaqua is where the Clintons maintain their legal residence.

Anyway, it’s a good collection of data so check out Kolko’s article, complete with better formatting of tables.