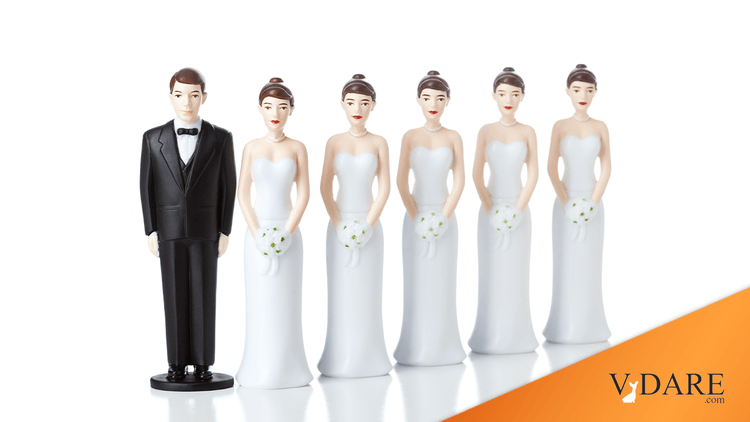 The Economics Of Eldorado

A couple of weeks ago, following a hoax phone call from (apparently) an Obama delegate in Colorado, the state of Texas seized 437 children from a community recently built outside of Eldorado, TX by the polygamous Fundamentalist Church of Latter Day Saints (which, for some reason, is known as FLDS rather than FCLDS).

I've been trying to understand the economics of Eldorado.

If you ask most guys, they'll tell you that having one wife is expensive. So, how do you have a community based on having a bunch of wives?

In tropical farming communities, the usual solution is to send the wives out to work hoeing the fields. That's how you come across stories now and then of some handsome, prosperous fellow in Kenya with 100 wives—he owns the land, but the work is being put in, overwhelmingly, by the wives.

The downsides to this tropical model (frequently found in Africa and the New Guinea area) normally include that childcare winds up catch as catch can and the husbands have a hard time keeping their wives in the fields away from local bachelors trying to lure them into the bushes. But then, does the husband care all that much if he winds up with a few cuckoo's eggs? He's not busting his hump for the kids, anyway, so it's not a big deal.

FLDS seems to be midway between the lackadaisical African model of paternal uncertainty and the Middle Eastern Muslim model of paternal paranoia with wives locked up in harems and only allowed out wearing tents. The FLDS women don't seem to be allowed out much to work in the wider world, and have to wear modest clothes at all times, but at least the FLDS doesn't have eunuch harem guards. (But they also throw out scores of young men each year to reduce the bachelors in the bushes threat.)

So, where do they get their money? Models that might be helpful to think about include:

1. Welfare fraud: Since the states don't recognize subsequent marriages, all the wives after the first are legally unwed mothers, eligible for Aid to Families with Dependent Children, food stamps, and so forth. Apparently, it's called "bleeding the beast."

2. Organized crime / politics: The main FLDS community of Colorado City, AZ / Hilldale, UT (it's on the border for purposes of legal confusion) is its own town in two different states, and lots of money comes down from Phoenix, Salt Lake City, and Washington D.C. for things like public schools, the local airport (used primarily by the Prophet), street paving and so forth. Supposedly, the place gets back $8 in state services for every $1 it pays in state taxes. Not surprisingly, the FLDS puts lots of its members on the state-supported payroll and appears to skim off a sizable fraction of the budget for its own purposes. In 2005, the state of Arizona put the local school district into receivership for mismanagement. So, it's kind of a racket.

Of course, the same thing could be said of a lot of municipalities, like, oh, Chicago. On the other hand, the Mayors Daley never quite had government employees as hypnotized into not rolling over for prosecutors as the Prophets Jeffs.

3. Pyramid scheme / slavery — The male members of the FLDS appear to be, in general, industrious and competent at blue collar trades, especially construction work. But their earnings are "taxed" at very high rates by the handful of leaders at the top of the church. All property is owned by the church.

Why do these hard-working guys put up with it? The Prophet gets to decide who marries whom. If he likes how much money you've brought in, maybe he gives you a wife. If he really likes you, maybe he gives you a second, prettier one. The sky's the limit. But, if the Prophet doesn't like you, no wife for you. In fact, he may expel you from the only community you've ever known. After all, there are about an equal number of boys and girls born to the sect, so a lot of the more unruly and/or less productive males get tossed out.

4. Puppy mill — Not surprisingly, not that many people want to convert to FLDS, so to keep the supply of young wives for elders as bountiful as possible, they have to grow their own. This leads to inbreeding problems. The Deseret Morning News reported:

Until a few years ago, scientists knew of only 13 cases of Fumarase Deficiency in the entire world. Tarby said he's now aware of 20 more victims, all within a few blocks of each other on the Utah-Arizona border.

The children live in the polygamist community once known as Short Creek that is now incorporated as the twin towns of Hildale, Utah, and Colorado City, Ariz. Tarby believes the recessive gene for Fumarase Deficiency was introduced to the community by one of its early polygamist founders.

According to community historian Ben Bistline, most of the community's 8,000 residents are in two major families descended from a handful of founders who settled there in the 1930s to live a polygamist lifestyle.

"Ninety percent of the community is related to one side or the other," Bistline said.

So, does this mean the state of Texas should have taken 437 children? Arizona tried it 55 years ago and it proved to be a nightmare.

So, I don't know what Texas should do now, but here's the first lesson for other states: Do not let these people infest your state.

When Texas first got wind of the FLDS plan to set up a compound a few years ago, they should have come down on them with a Racketeering Influenced Corrupt Organization (RICO) lawsuit, hostile building inspectors, environmental impact study demands, everything in the ample arsenal of the modern state to get them to go away.