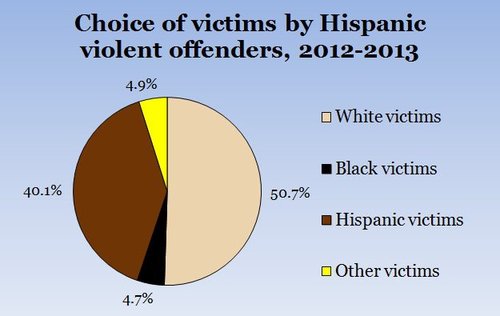 Over at Powerline, John Hinderaker has once again how far he has moved away from GOP cheerleading: Donald Trump Was Right July 7, 2015

For the last week, I have intended to write about Donald Trump’s observation that some illegal immigrants are rapists–or, rather, about the crazed over-reaction to Trump’s undeniably true observation.

...If we assume there are 11 million illegal immigrants living in the U.S.–that is a commonly cited number, but no one really knows–those illegals represent a little over 3% of our population and should commit around 3% of all crimes.

Data on convictions for federal offenses are available at the U.S. Sentencing Commission’s web site. Senate committee staff have analyzed those data, and found that “38 percent of federal convictions in FY 2013 were of illegal immigrants, and nearly 43 percent were legal or illegal immigrants.” That is more than ten times the number that would be expected if illegal immigrants were, on the average, as law-abiding as the rest of us. This is a more detailed breakdown:

So illegals are overrepresented with regard to these crimes by anywhere from two to 17 times.

Vdare.com emphasis. (The Breitbart version of this data is Illegal Immigrants Accounted for Nearly 37 Percent of Federal Sentences in FY 2014 by Caroline May 7 Jul 2015)

The Obama administration stopped enforcing our immigration laws, in violation of the president’s oath of office, because Obama believes it is a good thing for millions of illegals to flood across our borders….Immigration will be the biggest issue in the 2016 presidential race. Donald Trump won’t be the Republican candidate, but at least he understands why Americans are so angry at their government.

PowerLine was completely MIA in the Bush Immigration Wars but for the last couple of years Hinderaker in particular has done excellent work. Once he even linked to VDARE!!!!

Still, I must confess I might have gone with the Breitbart version of this story except for the comment of Raymond Golich, a Powerline “Top Commenter”

Coulter's Adios America is very useful but even Ann has admitted that she got many of her facts from the "dissident right" - the gang at Vdare.com, among others, who have generally all been fired from mainstrem "conservatve" sites for daring to question the wisdom of mass immigration. Brimelow, Derbyshire, Sailor, etc.

But ultimately, nothing will be done because:

which has not yet been RedStated!

(Peter Brimelow says Coulter’s book has a wealth of new material of which even he was unaware and if VDARE.com has had any influence it might be in conceptualization rather than data sourcing.)

As far as I can see this is the only reference to Adios America which PowerLine has carried.

Collegiality has limits, it seems, even when a great cause is at issue.