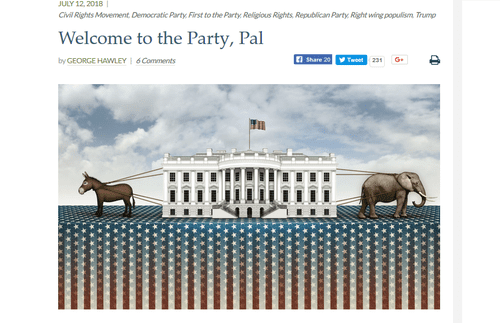 Populists Aren't Organizing. Is It Because They Won't... Or Because They're Not Being Allowed To?

Professor George Hawley is one of the few political scientists who actually seems interested in analyzing politics, as opposed to simply existing as a tenured parasite. F. Roger Devlin accused him of failing to understand the Alt-Right in Hawley's newest book, "Making Sense of the Alt Right." (I haven't weighed in on this book yet.) However, even his critics must concede Professor Hawley was one of the few who called the 2016 election. He has also been performing heroic work in breaking down some of the hidden indictators of voter behavior.

In his new review of Christopher Baylor's book "First to the Party: The Group Origins of Political Transformation," Professor Hawley argues the populist nationalists that helped propel President Trump to the White House have already been politically marginalized.

Since President Trump’s election, the Trumpist element of the GOP has done little organizing. Steve Bannon’s attempt to promote primary challengers to mainstream Republicans ended after the Roy Moore fiasco, and no one has since picked up that banner. There are no significant organized interests insisting Trump and congressional Republicans follow through on an “America First” agenda.

This has been a perennial problem for right-wing populist movements in the United States. These voters occasionally rally behind a charismatic candidate – Wallace, Perot, Buchanan, Trump – but they can never be counted on to do much beyond that. Part of their problem is that their agenda is not aligned with significant moneyed interests. This was also true of the religious right in its early days, but that community of voters was already organized into religious institutions, giving them an advantage when it came to political organizing. The Trumpist bloc remains atomized, and thus largely irrelevant. It is unlikely that Trumpism will lead to organizations analogous to the Christian Coalition or the NAACP.

Professor Hawley is right, but this isn't the full story. One reason we don't new institutions being created is because many nationalists have already won at least a rhetorical victory within the Beltway Right. President Trump is still very popular among Republicans, and the party is, slowly, moving toward Trump's positions on immigration. As long as Donald Trump remains in the White House, conservative talking heads are at least pretending to be immigration patriots, which strips populists of much of the rationale for rebellion.

President Trump's movement has been largely co-opted by Conservatism Inc. The talking heads who were once "Never Trump" are, with few exceptions, still in control of the movement. But the main reason they are still there is because they are now, rhetorically at least, pro-Trump. Even Glenn Beck has bent the knee and put on a MAGA hat.

Of course, all of this is on the surface. In reality, the conservative movement is actually more hostile to serious nationalists and populists than ever. Young conservative activists who want to mobilize people on behalf of issues like immigration or racial preferences will find their careers abruptly terminated; the profitable way foward is to organize college students on behalf of harmless issues like tax cuts while muttering vaguely on Twitter about the American flag. The rise of Trump energized journalists eager to dox and target up-and-coming activists who might actually champion a nationalist movement. Thus, the activists who last in Conservatism Inc. are the ones who stay within the lines and don't say anything too politically incorrect.

There's another reason these newfound "populists" within the Beltway Right are people like Ben Shapiro and Dana Loesch, as opposed to those who backed Trump from the beginning. Decades of conservative movement purges have made it difficult for the Dissident Right to build up the credentialed figures needed to fill staffing positions. When President Trump won, he turned to the very same Beltway Right figures who had once opposed him. This is why intra-DC battles that seem petty at the time, such as whether a certain staffer gets a job on the Hill or at the Heritage Foundation, can have huge effects later.

Finally, most importantly, it's not just that "moneyed interests" have no reason to back populism. It's that even if they wanted to, they can't. The ideas of VDARE.com, for example, undoubtedly helped propel Donald Trump's campaign. Yet in the years following his election, we lost our Paypal, we can't book a conference at a private venue, and the mainstream media is more feriously hostile than ever.(You can donate to VDARE.com here--for now.) Similarly, if a lone activist shows up to an immigration protest, he or she may find himself doxed by mainstream media reporters who will painstakingly investigate everything that activist has ever done and every association the activist has ever had. (Contrast this to the overt cheerleading reporters undertake for even the most extreme far-left activists). Not only do nationalists not have the resources other groups enjoy, they are also operating in a far more hostile climate and fighting against journalists who have long since abondoned any pretense to fairness, objectivity, or even truth.

None of this is to make excuses. Professor Hawley is fundamentally right to observe that conservatives, especially nationalists, are not simply not organzing on the ground the same way other groups do. (David Hines has been making this case for months.) They are far too eager to come out for a candidate, pull the lever and then go home.

However, nationalists face obstacles no one else does. One of the reasons they are so susceptible to believing fantasies about how a certain candidate will save them is because voting is perhaps the only thing nationalists can do without risking social and economic destruction at the hands of the media.

The conservative movement should be making it a priority to defend its own grassroots. For its own reasons, it will not do so. Paradoxically, the only dissident permitted within the Beltway Right is President Trump himself.