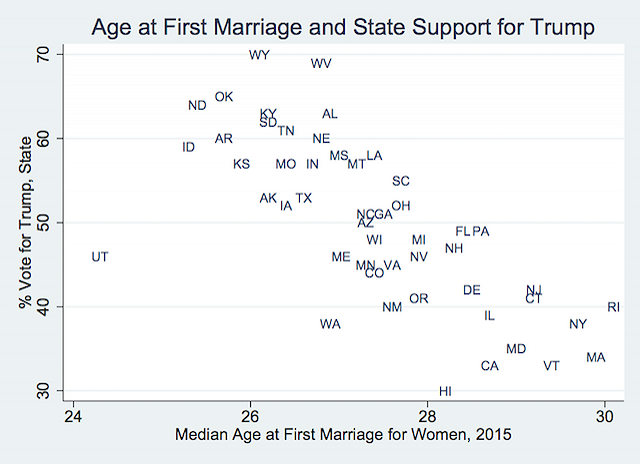 George Hawley, a professor of political science at Alabama, writes at the Institute for Family Studies:

The marriage gap is now one of the more consistent elements of American politics.

Prognosticators looking to forecast the future of American politics should keep a close eye on trends in the family.

One curious aspect of American political geography is that variables that predict partisanship at the individual level often do a poor job of predicting the partisan balance at the state level. African Americans are among the most reliable Democratic voters, but the region with the largest African American population (the Deep South) is reliably Republican; wealthy Americans are, on average, more likely to vote Republican, yet the Northeast, where so much of the nation’s wealth is concentrated, consistently gives its Electoral College votes to Democrats. This pattern makes it difficult to find variables that accurately predict whether a state falls in the Red or Blue camp. One of the few such variables is the median age at first marriage.

As I showed in an article for Party Politics, median age at first marriage for women had a strong, linear relationship with support for Bush at the state level in the 2000 presidential election. I found a similar relationship when looking at county-level and individual-level data. And this relationship remained statistically significant and substantively important despite controlling for a myriad of additional variables.

Although comparatively new (it did not garner much scholarly interest until the 1980s), the marriage gap is now one of the more consistent elements of American politics. I have conducted a similar analysis for all subsequent presidential elections. Although the 2016 presidential campaign upended many expectations, in this regard, it was business as usual, as we see in the figure below.

Although there was a slight decline in the correlation between these two variables in the 2016 election compared to 2012, this was almost entirely due to Trump’s poor performance in Utah compared to Mitt Romney—a significant percentage of Utah voters supported conservative third-party candidate Evan McMullen.

The follow-up question, of course, is what predicts earlier marriages? This is an important question, given that, if the relationship between marriage and Republican voting is not spurious, then the decline of marriage in the United States represents yet another long-term demographic problem for the GOP.

When considering this question, it is easiest to say that “culture”—however defined— explains different family formation trends, and that culture is the reason we see a partisan marriage gap. That is, in some states, people are more religious and traditionalist, which explains both the early marriages and the greater support for Republican voting. There is definitely some truth to this argument. For example, the large Mormon population in Utah explains both the state’s political conservatism and its high marriage and fertility rates.

These cultural explanations, however, neglect the scholarly literature demonstrating that many economic variables predict trends in marriage and the family. One such variable, which government policy can influence, is home affordability. To my knowledge, the blogger Steve Sailer was the first person to make the connection between home values, marriage rates, and vote choice. However, the existing scholarly literature supported this hypothesis.

Social scientists have noted the relationship between the availability of spacious housing and family size since at least the 1930s, and it makes intuitive sense.