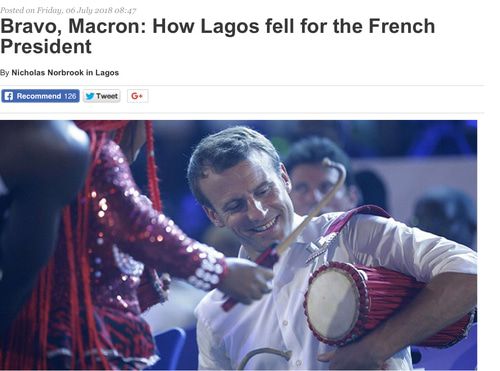 From The Africa Report:

Bravo, Macron: How Lagos fell for the French President
By Nicholas Norbrook in Lagos

…But beyond the Silicon Valley-style pep talk, there were other messages Macron was keen to give. On migration, he repeatedly emphasized the importance of rekindling hope and opportunity in Africa. The tragedy, he pointed out, was that it was not the poorest Africans who are migrating, but those from the middle class, with the money to finance the trip. “These are the people who you want to drive politics in your country”, said Macron.

“We have to deal with demography. When I spoke about it last year, people went crazy. It was not for a European to talk about it, though we had the same thing a hundred years ago in Europe”, said Macron. “When you have 7-8 children per woman, you can have 8% growth and you will remain poor. Ask your women – if they are ok with it, then fine. If its about forced marriage, then no.”