Z-Man devotes another full-length show to a single topic. As he concedes, an hour isn't enough to cover everything, but this is an invaluable primer for alt lite guys who are becoming restless with the captain of the Washington Generals and lessons from the dragon in Solzhenitsyn. Charon ferrying people across the river:

The phrase "identity politics" really entered the public lexicon in the mid-eighties:

Ngrams only goes through completed year 2007, but the phrase got a second wind on account of the Trump phenomenon:

As Z points out, lamentations about the rise in identity politics are coming from cuckservatives who hate how politically successful Trump has been.

Little Bennie Shapiro's appearance with Bill Maher is a great example of this. I'm #SometimesTrump, there is violence and threats on both sides, collectivism is a problem on the left and on the right, blah blah blah blah blah. Members of the Respectable Right--well, individuals who happen to share the same principles, that is, as the only thing we're member to is our own sacred individualism!--are supposed to hang separately, not band together to win.

Blacks have never been fond of immigration because it dilutes their share.

It's an assertion heard frequently. After all, it should logically be the case that blacks oppose open borders, especially low-skilled immigration, because it dilutes their political power and reduces their economic opportunities.

But surveys and polling never seem to bear it out. Blacks favor of open borders--or at least they say they do and vote for people who do. Percentages who approve of the way Trump has handled immigration, by selected demographic characteristics ("don't know"s excluded; N = 146,021--yeah, massive!):

Percentages who identify immigration as the top issue when deciding on how to vote (N = 9,898): 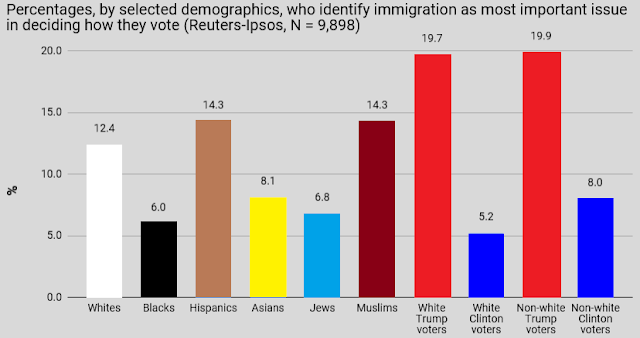 Maybe another subject Z addresses--negative identity--accounts for blacks waving the invaders in. The invasion hurts white Americans. Supporting it is a thing worth doing. Like the scorpion stings, black America resents white America.