From the Los Angeles Times, an article that looks at a forecast made in 1988 about what Southern California would be like in 2010. This is a useful exercise. 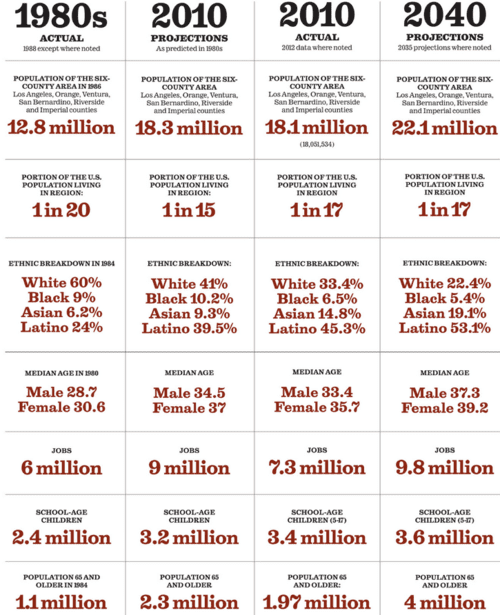 Planning experts look to the past to predict the future

What will Southern California look like in the future? …

Planning experts crunched some numbers and gave their best guess for 2010. Some of their projections came pretty close. Other changes since the 1980s took everyone by surprise. Studying these numbers helped officials rethink what it might be like by 2040.

- It’s worth noting that the 1988 population forecast for 2010 was extremely accurate (a forecast of 18.3 million vs. a Census enumeration of 18.1 million). That’s because 1988 was almost a couple of decades into the Environmental Age, so it was pretty obvious by then that Southern California in the future wasn’t going to grow as fast as it had in the 1950s and 1960s.

- While the planners got the population of Southern California correct, they underestimated population growth in the rest of the United States (which was largely due to immigration being more than they expected).

- The ethnic breakdown of 2010: the 1988 planners figured the historic American races of whites and blacks would still be 51% by 2010, but they turned out to be 39.9%. The 1988 planners missed that blacks would be squeezed out of Southern California by high prices. They also badly underestimated the Asian influx, while only moderately underestimating the Hispanic influx.

- Jobs: the planners assumed 9 million jobs by 2010. In reality, there were only 7.3 million (at least jobs that the government had heard about). How can they afford that? Well, as it turned out in 2008, they can’t. Fortunately, the planners are confident that by 2040 we will definitely break the 9 million jobs barrier. This can’t possibly go wrong like the last time, can it?

- School-age children: the 1988 planners slightly underestimated the number of school age children in Southern California in 2010. Once again: how can they afford that? Once again: they can’t. The unexpected school-age children is related to the Hispanic baby boom that broke out in the late 1980s and went into the 1990s due to the 1986 amnesty. This busted the LAUSD, causing it to to go to year-round school calendars and build insanely expensive schools like the $578 million Robert Kennedy Schools building on Wilshire. But we wouldn’t want to know about the impact of amnesty because knowing stuff is bad.

- The elderly: the planners overestimated the number of old people in Southern California. I mean, it seems like a nice climate for the elderly, but it’s expensive. For example, I just dropped about $2900 on car repairs (granted, my two vehicles are 14 and 17 years old, which is an advantage of Southern California: without salting the roads to de-ice in winter, cars last longer). On the 17-year-old car with 241,000 miles, I spent $850 on finicky maintenance to pass the Los Angeles smog test (and maybe $300-$500 on the 14-year-old minivan). Not to mention having to then drive 150 miles at high speeds during working hours to clean out the engine so that it could just barely pass the smog test. As I may have mentioned once or twice over the years, the smog enforcement is remarkably effective: L.A. has barely any smog anymore. But you can also see why so many people have said: I can’t afford this anymore, I’m moving to Texas.

By the way, from the new LA Times article:

The Times asked this question back in 1988, when 60% of the population was white and it took only 15 minutes to zip down the freeway from the Valley to downtown L.A.

At three o’clock in the morning in 1988. In reality, the Hollywood Freeway connecting downtown to the San Fernando Valley has been jammed at rush hour almost from the day it opened in 1954. A 1994 L.A. Times article on its 40th birthday recounted:

A year after the $55-million freeway opened, traffic engineers lamented that it was jammed with 183,000 vehicles a day–”almost double the volume it was designed to carry” and earning it a place in Bob Hope’s routine as the “biggest parking lot in the world.”

One reality check technique I find useful for remembering better is to think about milestone dates. For example, to evaluate whether the Hollywood Freeway was free-flowing in 1988, recall that it was widely predicted that the 1984 Los Angeles Olympics would be bogged down by traffic jams (and smog and terrorism), but to the surprise of everybody, the freeways were eerily empty. The 1984 Olympics were the exception that proves the rule that the central Los Angeles freeways were famously congested well before 1988. (To pass the smog test, I had to take three long runs on the newer freeways in the extreme north of the San Fernando and San Gabriel Valleys, such as the 118 and the 210, so I’m totally up on freeway congestion.)