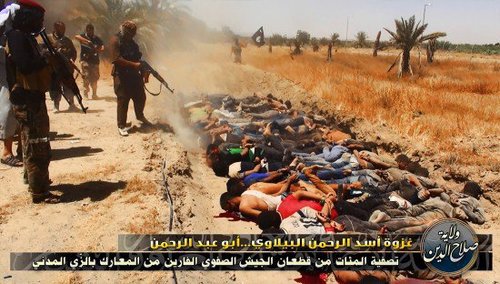 Saturday, June 20, was designated by the UN as World Refugee Day. It might better be called Islam Jihad Victims Day, because many (if not most) of the genuinely displaced persons have been forced from their homes by hostile Muslims organized into murder gangs like ISIS. Jihads can as easily be Sunni vs. Shia as Muslim vs. Christians, so quite a number of people can be affected. 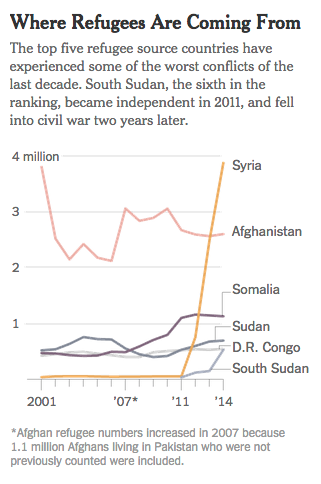 Dedicated do-gooders like the UN think that we first-worlders should admit millions of Muslim refugees as part of Marxist global redistribution with extra diversity added. But that means injecting Europe and America with the same totalitarian virus of jihad that caused the refugee-creating upheavals in the first place. This is the same process by which Islam turned north Africa and the Middle East from Christian to Muslim. There were no cameras during the early period of Islam conquest, so we don’t remember the massacres and refugees from that period. But today’s rape, torture and mass murder must give a good approximation of militant Islam on the march in centuries past.

Naturally the diversity-deranged Democrats want a big dump of Syrians for America, which is a very bad idea.

In importing Muslim refugees, how would bad ones be kept out, particularly after the Obama administration lowered screening standards for admittance? How would young refugee Muslims be dissuaded from going jihad when many appear to prefer it? Hasn’t assimilation been shown to be a failure with so many Muslims leaving the US to join the ISIS gang?

(CNN) The world’s refugees are all too often shunned, discriminated against or forgotten. As the United Nations marks World Refugee Day on Saturday, Hollywood actor and director Angelina Jolie is lending her support by visiting a refugee camp in Turkey.

It won’t be the first such visit for Jolie, who’s a special envoy for the U.N. refugee agency, the UNHCR. She’s previously visited refugee camps in Jordan and Iraq to see the plight of families forced from their homes by Syria’s long conflict and the advance of ISIS.

She will be accompanied Saturday by U.N. High Commissioner for Refugees Antonio Guterres and Turkish President Recep Tayyip Erdogan.

In a statement, Guterres warned that “a spreading global violence has come to threaten the very foundations of our international system” and urged the world not to turn its back on those who most need its help.

“More people fled last year than at any other time in our records. Around the world, almost 60 million have been displaced by conflict and persecution. Nearly 20 million of them are refugees, and more than half are children,” he said.

Their numbers are growing every day, on every continent, he said. And they rely on the world for their survival.

“They will remember what we do,” he said. “Yet, even as this tragedy unfolds, some of the countries most able to help are shutting their gates to people seeking asylum. Borders are closing, pushbacks are increasing, and hostility is rising. Avenues for legitimate escape are fading away.”

At the same time, he said, humanitarian organizations like the UNHCR run on shoestring budgets, unable to meet the spiraling needs of such massive numbers of people.

A report from the UNHCR on Thursday gave the same stark warning.

On average, 42,500 people were displaced every day in 2014, it said. The conflict in Syria has been the biggest single driver of displacement, according to the refugee agency’s Global Trendsreport — but far from the only one.

Most refugees come from the Middle East, with 7.6 million Syrians taking to the road within their own country, and 3.88 million having become refugees. Many have found shelter in neighboring Turkey, others in Lebanon and Jordan.

In Asia, the report highlights growing numbers of people fleeing Myanmar. And in the Americas, there was a rise in the number of people seeking to escape gang violence in Central America.

Former U.N Secretary General Kofi Annan said via Twitter that it was time for the world to accept that “the ebb and flow of human movement cannot be stopped.”

In his statement Saturday, Guterres called on the world’s richer nations to “shoulder collectively the burden of helping the victims of war” or risk letting less wealthy nations — which take in 86% of the world’s refugees — become overwhelmed and unstable.

“Since the beginnings of civilization, we have treated refugees as deserving of our protection. Whatever our differences, we have recognized a fundamental human obligation to shelter those fleeing from war and persecution,” he said.

“Yet today, some of the wealthiest among us are challenging this ancient principle, casting refugees as gate crashers, job seekers or terrorists. This is a dangerous course of action, short-sighted, morally wrong, and — in some cases — in breach of international obligations.”

U.S. President Barack Obama said in a statement that his country must remember its history of helping those in need.

“World Refugee Day is a solemn occasion for the United States to join our partners in the international community in recognizing the dignity, value, and potential of every one of these lives,” he said.

“It is a time to recall this nation’s proud tradition of providing support to those who are most vulnerable, and a moment to challenge ourselves to continue being as generous and resourceful as we can in meeting their needs.”

Former U.S. Secretary of State Madeleine Albright also recalled how her own family had been given shelter, decades ago.

Meanwhile, the European Commission urged leaders in Europe “to follow through on their commitment to greater solidarity and shared responsibility in addressing refugee crises. These are human lives at stake, and the European Union as a whole has a moral and humanitarian obligation to act.”