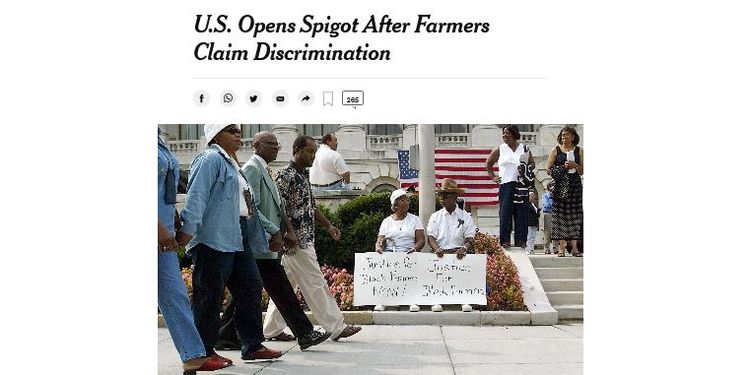 Steve Sailer, below, links to a story on the "Black Farmers"/Pigford law suits from the NYT: Federal Spigot Flows as Farmers Claim Bias,  By Sharon Lafraniere, April 23, 2013.

An emailer wrote in to say that this vindicates the late Andrew Breitbart over the Shirley Sherrod scandal—see my article Sherrod, Obama, Pigford, Sullivan for details of this 2010 kerfuffle.

In it, I wrote

Well, it happens that VDARE.COM has also written about the struggles of black farmers—against, actually, the American taxpayer—in what's called the Pigford settlement.

It's a huge scam, paying not only people who farmed, but also those who tried to farm, and those who meant to farm but never really got around to it, and those who say they meant to try to farm.

The story we published was Dennis Tuttle's  coverage of the fraud rings that had sprung up around Pigford claims was published in 2006.

While it was Obama's administration that decided to not defend these claims, the scam has been going on since the Clinton Administration.