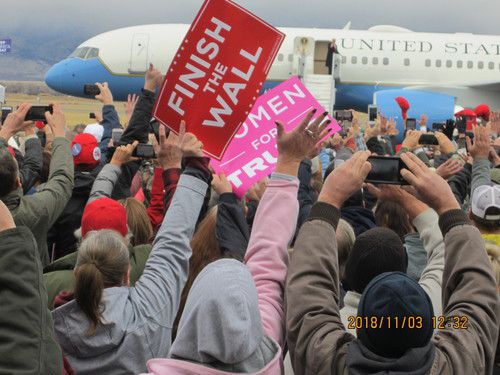 Ann Coulter's most recent  column details the ways President Trump—whose squeaker of an election win was enabled by his announced intentions on immigration policy—has thoroughly flubbed things on this nation-breaking subject ever since his inauguration.  A few days earlier, speaking in West Palm Beach, Coulter characterized Trump as a "shallow, narcissistic conman."

Just before November's election, Trump campaigned in Montana on behalf of Matt Rosendale, who was running for the U.S. Senate against incumbent Democrat Jon Tester.  (Tester won, narrowly.)  I'm not much for speeches by politicians, but I attended the rally, held at Bozeman's airport, because it was a once-in-a-lifetime opportunity to see a U.S. president in-the-flesh.

As Mark Steyn wrote after attending a Trump rally in early 2016 (Notes on a Phenomenon, January 9, 2016), Trump on the stump is refreshingly different from politicians-for-life.  Indeed the contrast between Trump's meandering riff and Rosendale's brief bit of forced rah-rah was immense—and all in Trump's favor.

And Trump repeatedly brought up immigration, but basically just "the wall."  (See the accompanying snapshot, showing Trump [look hard!] as he was about to re-board Air Force One, and note the signs being waved by audience members.  Those signs, available for free and in large numbers—pallets of them!—were paid for by some organization associated with Trump, perhaps his re-election committee.)

Among the missed opportunities to educate the audience, there was no mention of E-Verify or of reducing legal immigration.  It was really all just slogans and lazy posturing.  So I strongly connect with something Michael Goodwin wrote on Saturday:

I believe the president truly wants better security and is genuinely moved by the suffering of those families who lost loved ones at the hands of illegals.

But he and his revolving staff were erratic in their demands for wall funds, even as the president kept saying at rallies that the border was a priority. Lacking consistent follow-through, that promise never became legislative reality.

[We’re nowhere near a solution to the immigration crisis, New York Post, March 16, 2019]

Thus I've been exasperated over our immigration-policy stasis, independently of Ann Coulter's venting.  So coincidentally, a couple of days before her column appeared, I had phoned the White House comments line (202-456-1111) to raise the subject, in hopes some of my ire would trickle upward.  Instead of reading verbatim a script, I worked from the following notes, starting with a nod to the (volunteer) comments operator who took my call.

Thanks.  Hope it’s an interesting job.

Voted for Trump because of immigration

He gave a terrific speech on the subject in August 2016

Delighted when he won – meant the country had a chance to survive as a livable place, instead of descending into Third World conditions, which is where immigration is taking us.

Now increasingly disgusted with how he’s performed on fixing immigration

Endorsement of Senator Cotton’s RAISE act, reducing legal immigration, but then failure to push for it when he had the House majority

Current failure to follow-up on ending birthright citizenship for illegal aliens, which he brought up last fall – but there’s never any follow-up

He acts like a cat chasing a laser pointer; he can’t remember why he got elected.

He should reread his August 2016 speech and then start performing like he promised.

The operator greeted me and asked for my brief comment.  I recorded my end of the conversation, and you can hear it here.

Probably my comment, about 70 seconds long, wasn't as brief as he hoped, but he didn't cut me off.

Immigration patriots by the hundreds and thousands should be making such calls to the White House.  Collect your thoughts, jot down a few notes, and make the call.  What do you have to lose—besides this country?

If you need some verbal ammo, here's the transcript for that great August 2016 speech.  Or perhaps more conveniently, here's John Derbyshire's executive summary:

The policy specifics of that speech were presented as ten bullet points. Executive summary: