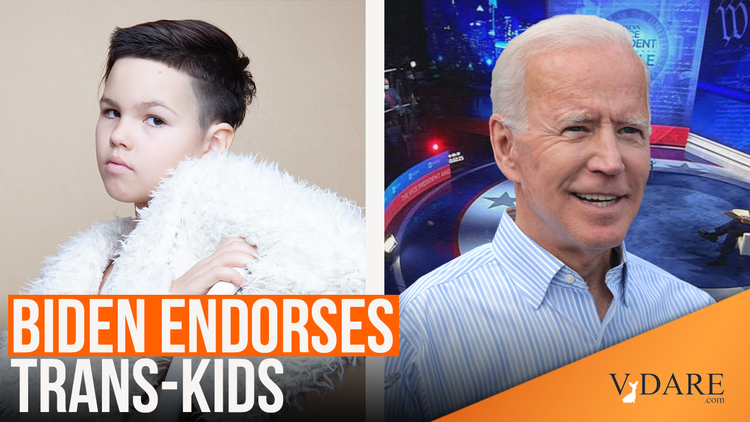 Biden: There Must Be No Discrimination Against 8-Years-Olds Who Decide They Are Transgender

STEPHANOPOULOS: I want to get one more question this segment and it comes from Mieke Haeck. She’s from state college Pennsylvania. This is your first presidential election that you’re voting.

MIEKE HAECK: It is.

BIDEN: Hi, Mieke, how are you?

HAECK: I’m good, thank you. I’m the proud mom of two girls, 8 and 10. My youngest daughter is transgender. The Trump administration has attacked the rights of transgender people, banning them from military service, weakening non discrimination protections and even removing the word transgender from some government websites.

How will you as president reverse this dangerous and discriminatory agenda and insure that the lives and rights of LGBTQ people are protected under U.S. law?

BIDEN: I will flat out just change the law. Every — eliminate those executive orders, number one. You may recall I’m the guy who said — I was raised by a man who I remember I was being dropped off, my — my dad was a high school educated, well read man who was a really decent guy.

And I was being dropped off to get an application in the center of our city; Wilmington, Delaware, the corporate capital of the world at the time. And these two men, I’m getting out to get an application to be a lifeguard in the African American community because there was a big swimming pool complex.

And these two men, well dressed, leaned up and hugged one another and kissed one another. And I’m getting out of the car at the light and I turn to my dad. My dad looked at me and said Joey, it’s simple. They love each other.

The idea that an 8-year-old child or a 10-year-old child decides, you know I decided I want to be transgender. That’s what I think I’d like to be. It would make my life a lot easier. There should be zero discrimination.

BIDEN: And that’s just this year. And so I promise you there is no reason to suggest that there should be any right denied your daughter or daughters, whichever one or two …

BIDEN: … one, your daughter — that your other daughter has a right to be and do. None, zero. And by the way, my son Bo, passed away; he was the attorney general in the state of Delaware. He was the guy who got the first transgender passed in the state of Delaware and because of a young man who became a woman who worked for him in the attorney general offices.

STEPHANOPOULOS: We’ve got one more segment coming up. Thank you.

BIDEN: And I’m proud of that.

A big question is whether Biden has the strength of character to resist the Woke zeitgeist. This year, in his enthusiasm for the New Nuttiness—e.g., his announcement in Kenosha that a black man had invented the light bulb rather than Thomas Edison—he often seems like a naive old lady whose favorite teenage granddaughter has been staying with her and suddenly the old lady totally believes all the new things she is hearing from her beloved grandchild about transgender light bulbs that she learned on Instagram.

I’d feel more reassured if I could tell that Joe is really a cynical bastard who is just saying zany things for cynical reasons, but I have the sinking feeling that Joe is Joe’s own best audience: after he says something, he seems persuaded of the rightness of whatever just came out of his mouth.