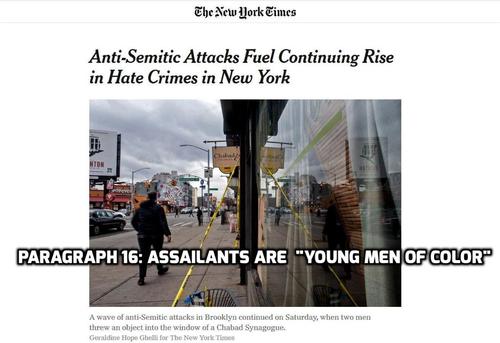 Gray Journalism: How the NYT Makes A Story About NYC's Surge In Anti-Semitic Black Violence Dull

Gray Journalism is the converse of Yellow Journalism: it’s intentionally making intrinsically interesting stories boring and hazy to discourage reader attention. The chief proponent of Gray Journalism is The Gray Lady, the New York Times. Here’s a classic example as a seemingly interesting topic — a surge in anti-Semitic crime, including random attacks on Jews on the streets — in New York City is dulled down by hiding the answer to the most obvious question — Who is committing these hate crimes? — until the 16th paragraph.

The three incidents, all of which took place in Crown Heights, Brooklyn, in the past year, have raised alarms in the neighborhood and in the city’s large Orthodox Jewish community as a whole. Hate crimes are up citywide, but in Crown Heights, they have taken a particularly violent turn.

There were 55 hate crimes reported in New York City this year as of Feb. 17, an increase of 72 percent over the same period last year, the police said. Anti-Semitic crimes made up almost two-thirds of that, for a total of 36 crimes reported so far this year, compared with 21 last year.

The steep rise comes after a year when hate crimes were already increasing. Anti-Semitic crimes in 2018 were up 22 percent compared with 2017.

The wave of anti-Semitic attacks in Brooklyn continued on Saturday, when two men threw an object into the large front window of a Chabad Synagogue in Bushwick, Brooklyn, at about 2 a.m. No one was injured. The attack, which shattered the window, is being investigated as a possible bias crime, police said.

“Despite the intentions of this attack to divide and intimidate, our doors will remain as open as ever, welcoming visitors to join our growing Bushwick family,” Rabbi Menachem Heller wrote on Facebook shortly after the attack.

On Sunday, Gov. Andrew M. Cuomo directed the hate crimes unit of the State Police to assist local police in their investigation of the Bushwick attack. “This act of hate is shocking and abhorrent, especially at a time of great division in this country,” he said in a statement.

Since the start of the year, police have made a number of arrests on the Upper West Side and in Brooklyn for spray-painted swastikas and similar acts. One repeat offender may be making the hate-crime increase look particularly intense, the Police Department’s chief of detectives, Dermot Shea, has said.

“We’ve had one individual account for 10 to 15 separate incidents,” Chief Shea said at a Feb. 5 news conference.

But in Crown Heights, the increase in hate crimes has been more shocking because it has been marked by violent, seemingly unprovoked attacks on men and women in Jewish garb, many of which have been caught on surveillance video, and then widely viewed online. In many cases, there is no robbery, only the random attack.

“We need to go back to the drawing board. We cannot allow it to continue,” Ms. Halberstam said. “Walking down street and getting punched in the stomach? This is insanity.”

In January alone, several Orthodox Jews were punched, seemingly unprovoked, in broad daylight on Kingston Avenue, the main Jewish thoroughfare in Crown Heights. In late January, a 22-year-old Yeshiva student was beaten on the street while calling his parents on the phone in Australia. A few hours later, a 51-year-old man was beaten so badly by the same assailants that he was hospitalized.

The police have made arrests in many of these attacks, much to the relief of residents. Still, they wonder what is provoking this wave of violence.

Rabbi Eli Cohen, the executive director of the Crown Heights Jewish Community Council, has begun visiting nearby public schools with Geoffrey Davis, an African-American community leader, to try to understand what may be driving the attacks, as many of the assailants arrested by the police have been young men of color.