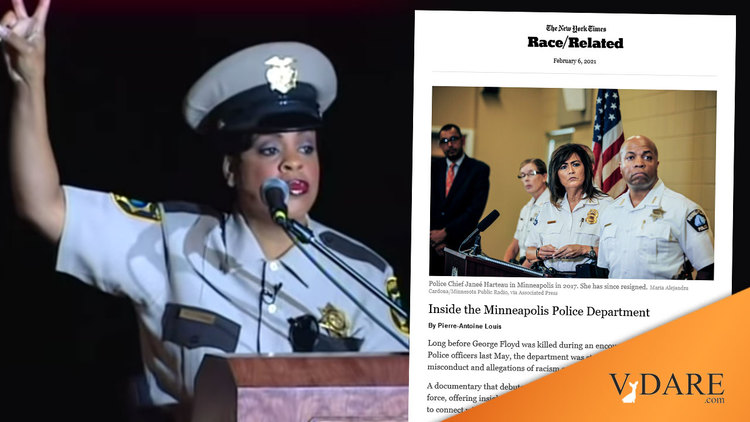 Earlier on female cops: Guilty: The SPLC And The Atlanta Courtroom Massacre

Inside the Minneapolis Police Department
By Pierre-Antoine Louis

Long before George Floyd was killed during an encounter with Minneapolis Police officers last May, the department was struggling with a history of police misconduct and allegations of racism and sexism within its ranks.

A documentary that debuts next week on PBS takes viewers inside the police force, offering insight into the inner workings of the department and its efforts to connect with residents.

Filmed between 2017 and last year, the documentary, “Women in Blue,” follows the first woman to serve as chief, Janeé Harteau, and focuses on four female officers, each trying to redefine what it means to protect and serve. After a high-profile, officer-involved shooting forces Chief Harteau to resign

Obviously, there’s no need to remind the delicate sensibilities of paying NYT subscribers that this was the killing of a white woman, yoga instructress Justine Damond, by the Minneapolis police department’s celebrated first black Somali man cop, the incompetent Mohamed Noor. That’s a little too much cognitive dissonance for NYT readers to handle before about the 23rd paragraph.

, the new, male chief selects only men as his top brass.

The film, which airs on Monday, reveals the limitations of police reform through incremental changes and asks — and tries to answer — questions that apply well beyond the city of Minneapolis, including whether increased gender equity and more women, particularly Black women, contribute to better public safety.

Deirdre Fishel, the film’s director, talked about the challenges — and the importance — of making “Women in Blue” at this time. Our conversation has been lightly edited.

Q. How did the idea come about?

A. After Eric Garner’s death at the hands of police in Staten Island, N.Y. I was only a couple of blocks away because I was filming my last film. It just seemed unbelievable and so outrageous, and I had a woman friend who was a cop and I had actually never talked to her about policing because I was somewhat anti-police and I asked her if it could have happened if she was there. She explained to me what her approach would have been, which was such a human approach.

Of course, you know and I know that a black policewoman, Kizzy Adonis, was in charge of the NYPD who responded to Eric Garner. But that’s not the kind of fact that fits the Narrative, so who can remember it?

Then I started thinking, “do women police differently from men?”

I found statistics going back 30 years that women rely less on physical force because they communicate better, and they’re better at defusing potentially violent confrontations before they turn deadly.

It’s almost as if male cops, both partners and supervisors, tend to protect female cops from violent situations.

And I just thought, given the prevalence of police violence in this country, why is the issue of gender kind of nowhere to be seen? …

A. I was so excited when I started the film because there was a young Black woman from a police family in North Minneapolis who really wanted to work in the community. But she didn’t run fast enough in that mile and a half and she never got on.

Instead of outdated male concepts of policing, like chasing fleeing criminals down the alley, this young Black woman was going to bring sophisticated female ideas, like working in the community and communicating better and maybe offering the suspect a Krispy Kreme donut.

The reason that there are so few women in the police force is that it hasn’t been a very hospitable place for a lot of women.

It is almost as if the Mean Streets of violent urban America are indeed not a very hospitable place for a lot of women.

But I’m hoping that the film and the moment — with Kamala Harris, Stacey Abrams, Val Demings and so many extraordinary women out there — that we’ll get a little bit of traction and that people will think, “I thought about race, but I never really thought about gender and how having more women could really impact the level of police violence against communities of color.”

We especially need women cops of color who can’t run a mile and a half. They wouldn’t need to Retreat to the Donut Shop because they’d never leave.

Fortunately, the cinema has provided us with the perfect role model of the New, Improved Policeperson of the Future, Officer Laverne Hooks: