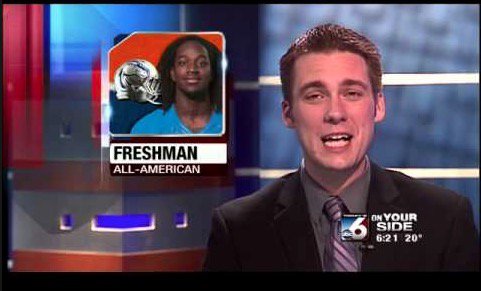 When recruiting, scrape the bottom of the behavioral barrel harder than the other coaches dare.

Sure, it often ends up in a campus rape scandal, but by then maybe you’ve moved on to an even better job.

A highly touted Baylor football player was convicted of sexually assaulting a fellow student after the school kept the disturbing allegations under wraps for years — and continues to deny it was warned about the player’s violent past.

A jury in Texas district court found 22-year-old Sam Ukwuachu guilty Thursday of one count of sexual assault. Ukwuachu faces up to 20 years in prison as the punishment phase of his trial continues Friday.

The details of the alleged assault are frankly terrifying. Here is the sworn testimony of Ukwuachu’s accuser, who was 18 years old and a virgin when she accompanied Ukwuachu, who is listed at 6-3, 230 pounds, to his apartment around 2 a.m. one late night in October 2013, according to court documents obtained by Texas Monthly: …

Ukwuachu, a defensive end who transferred from Boise State University in 2013, was a Freshman All-American for the Broncos. …

According to Texas Monthly, Ukwuachu was kicked off the Boise State team for a previous incident of violence involving a female student, and Boise State officials refused to support Ukwuachu’s return to the field in back-channel communications between the two programs.

Baylor coach Art Briles denied knowing anything about Ukwuachu’s history of violence at Boise State. The football program, which has become a darling up-and-comer under Briles, endorsed Ukwuachu’s participation in conditioning work with the team while suspended pending legal proceedings — an absence that was never fully explained to media covering the Bears.

“I talked with [former Boise State coach] Chris Petersen personally,” Briles said Friday, according to ESPN.com. “No mention of anything beyond Sam being depressed, needing to come home. …

Petersen, now the coach at Washington, all but called Briles a liar in his rebuttal.

“After Sam Ukwuachu was dismissed from the Boise State football program and expressed an interest in transferring to Baylor, I initiated a call with coach Art Briles,” Petersen told ESPN. “In that conversation, I thoroughly apprised Coach Briles of the circumstances surrounding Sam’s disciplinary record and dismissal.”