Me, The Matricula, And The Internet

Being the proud owner of my own Mexican matricula consular id cards (I have three, the name on one I keep to myself) has proven invaluable to illustrate the ease of forgery and access tothese little laminated stealth amnesty cards.

I have been spending a lot of time recently speaking to various groups around Georgia (which has prevented me from making regular contributions to VDARE…sorry, Peter) in an effort to educate them on the facts and consequences of the illegal immigration crisis created by the President of the United States’ refusal to secure our borders in a war on terror.

One of the first questions I ask, whether the group numbers 30, 100 or 1500, “how many of you are aware that we had an amnesty for nearly three million illegal aliens in 1986?”

Most interesting fact about speaking to several groups a week here?

I have never had more than 20% of the audience raise their hands…and these are normally educated and aware people. Most often, county GOP organizations.

Good job by the MSM in hiding the 1986 amnesty while promoting the next one...eh?

As part of my presentation, I talk about the matricula, explain that the Office of Intelligence of the FBI regards that Mexican ID as a security threat to the U.S. and show one or both of my enlarged and foam board mounted versions.

On both, my own face for radio in the photo. On one, my own name and DOB and address…on the other, I chose a different name – “Al”.

“Al Qaida Gonzalez”. I think it makes the point perfectly. 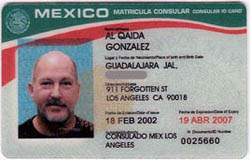 A reader with was kind enough to send me a link to a Google images page that has one of my matricula consulars featured—the Al Qaida Gonzalez matricula, which appears in several places on Google.

Then I found that a Mexican newspaper, El Porvenir in Monterrey, has posted an article on its site (under “legal”) that reports on the efforts in Mexico t o convince the Mexican House of Representatives to accept the matricula consular…like the United States does.

Like U.S. banks do.(The article does not mention that American airlines accept the matricula as well, but that Blockbuster Video does not.

The original article is here. I ran it through an online translator here and got this out in English.

They request acceptance of the matricula consular Tuesday, 27 of December of 2005

The federal Deputies exhort the federal executive so that this matricula consular is accepted as identification in all the country.

Mexico, 26 December (Notimex). - The House of Representatives exhorted the federal Executive so that the consular matriculation of high digital security, that sends the Secretariat of Relaciones Exteriores (SRE), is accepted as official identification in all the national territory.

Also they asked for the federal Executive to manage the necessary thing before the financial and private sector, as well as with the state and municipal governments and the different levels from government, so that they accept this document.

The federal deputy Juan Manuel Dávalos Padilla, into Partido Institutional Revolucionario (PRI), informed that with this proposal he tries himself to support to the connacionales so that when you would reingresen to the national territory accepts the consular matriculation to them that grants the Mexican chancellery.

In interview in the Legislative Palace of San Lazaro, he was sorry that to the emigrants who return to the country she denies the passage to them to Mexican ground with the presentation of the mentioned document although she fulfills the requirements that the SRE for their expedition asks for.

Dávalos Padilla referred that this matriculation is accepted by the Federal Electoral Institute and in theUnited States it is valid to open banking accounts and to make proceedings before the police departments, public libraries and issuance of driver's license, among others.

The emigration from Mexican to the United States has grown years in the last and continuously that country accepts or approves diverse requests of the Mexican diplomatic authorities, like the certificate of consular matriculation that is used in diverse states of that nation, indicated.[Piden sea aceptada matricula consular< , ElPorvenir.com, December 27, 2005]

As far as I can see, the editor in Mexico , in an effort to illustrate the contention that the “consular matriculation of high digital security” is …well…..”secure” has gone into Google images, found an image of a matricula consular, ignored the name on the card, totally disregarded the mugshot photo, and used my Al Qaida Gonzalez matricula image in their posting.

It took me two days to stop laughing at the irony before I could write this up.

Fun is where you find it.