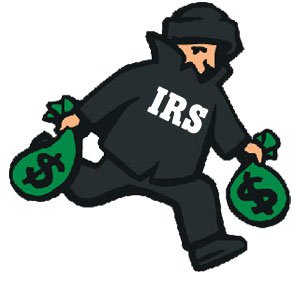 On Immigration, The IRS Can Do Something Useful!!!

The specter of the IRS made two useful appearances in the Immigration debate this week.

Last week, WTHR in Indianapolis, aired a report revealing that the IRS has been deliberately covering up the identities of people who file their taxes using stolen social security numbers, which is how illegal immigrants are able to get hired.

According to whistle blowers, the IRS recognizes a ripped off number right away because their computers check it. But you know what they do about it? Nothing!

What a surprise! Ross goes on

…because these tax returns have names and addresses, this means the IRS basically has a directory of every illegal tax-paying worker in the United States.

If a President Trump decided to use that information, his Deportation Force would know exactly where to go, and would have all the proof it needs to make charges stick — tax returns are signed under penalty of perjury.

(In Alien Nation 20 years ago Peter Brimelow reported that the IRS had realized this was the case with the Social Security numbers of refund recipients. So they programmed their computers to override the resulting freeze and mail the checks out anyway.)

Having confirmed the veracity of Trump’s concept

RUSH ARCHIVE…Trump was talking about Eisenhower and how he deported a million and a half…Trump was entirely correct to point out the history, what Eisenhower did.  And I don't think Trump went far enough, actually.  In reality, Harry Truman, another Democrat president, deported illegal aliens, over 3.4 million.

Limbaugh turned to the practicality objection:

...if the top 12 million taxpayers in America decided to break the law and stop paying taxes, would we suggest that we couldn't go find them and put them in jail or penalize them because we would be separating them from their families?... My point is, this is the one instance in law where everybody in the establishment comes up with excuses and reasons why it can't be enforced.

But if you have 12 million taxpayers, and they all get together and decide, "You know what? Screw the IRS! They're screwing us; we're just not gonna pay our taxes." Could we find them all?  If we found them all, could we prosecute them all, and could we convict them all and put them in jail, and would we break up those families?  And the answer is damn right we would.

He concluded by repeating

Here in illegal immigration it's the one set of laws that we have that the entire establishment finds every way in the world not to enforce.

Earlier this week Limbaugh wasted time defending Ben Carson (whom he sadly noted in this piece espoused “the establishment plan” about immigration at a Lynchburg Virginia press conference on Wednesday). But since then he has done valuable work: Friday's Immigration Issue Explains Trump's Rise is a good piece too.