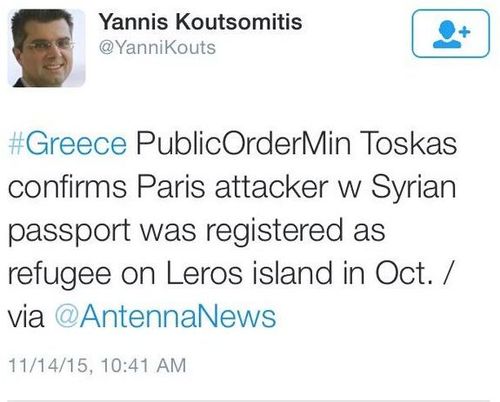 Here's Reuters, referring to a suspect in the Paris attack:

What they mean is a Muslim—either black or Arab—who has French citizenship papers, either by birth or immigration. Here's Iowahawk's response:

But they weren't all "Frenchmen"—at least one of them was a Syrian "refugee" registered on on the Greek Island of Leros, according to Yanni Koutis in Greece:

#Greece MigrationMin Mouzalas on Sept 9: It wd be "foolish to believe that there are no jihadists among the refugees that cross into Europe"

#ParisAttacks appear to be work of self-contained cell back from #Syria, UK sources tell @BBCNews https://t.co/cux8Q2GhGm