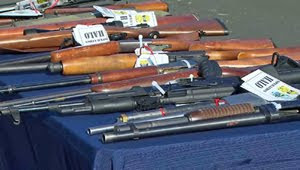 Some of the weapons seized in Operation Halo. (KTLA-TV)

[Very recent VDARE reports by yours truly, on Anaheim’s gangs, and their reconquista and communist comrades:

Anaheim I: “Report from Occupied America: Thanks to Immigration (and the MSM), Not Walt Disney’s Anaheim”; and

Finally, some good news out of Anaheim!

Anna Drive, where this operation arresting 49 Hispanic gang-bangers was carried out, is the same street where only days earlier, Anaheim Mayor Tom Tait met with Hispanic residents who were outraged over two fatal Anaheim PD shootings of Hispanic gang-bangers Manuel “Stomper” Diaz, 25, and Joel “Yogi” Acevedo, 21. Stomper Diaz allegedly reached towards his front waistband, as if for a weapon, and “Yogi” Acevedo allegedly shot at, attempting to murder the cop who then returned fire, killing him.

Note the 10 Pounds of crystal meth seized from the Hispanic gang-bangers. It is a rehearsed response among lefties that working –class whites are all dealing and/or using crystal meth, but the stories I’ve seen over the past year suggest that blacks and Hispanics have taken over the distribution and dealing of crystal meth. But 20 years from now we’ll still hear the same talking points from brain-dead, lyin’ lefties.

I could find no news stories reporting that residents on Anna Drive had ever protested against the gangs.

How long till we hear from the gang-bangers’ reconquista and communist comrades that law enforcement was guilty of “racial profiling,” in making these arrests?

P.S. Reading upside down, Kathy Shaidle-style, we learn the following:

While KTLA barely mentions Manuel Diaz in this story, KABC left him out completely. But according to the L.A. Times, "Manuel Diaz was identified as a member of the Eastsisde Anaheim gang and would have been targeted during the sweep." Can't trust our networks anymore, folks, can we?

The Bureau of Alcohol, Tobacco, Firearms and Explosives led a task force in "Operation Halo," which targeted the Eastside Anaheim gang.

The operation resulted in 49 arrests on both federal and state charges. Most of those arrests were made early Friday morning.

Authorities also seized about 40 firearms, including sawed off shotguns and assault-type weapons, as well 11 pounds of crystal meth.

One of the weapons recovered, a pistol that was purchased undercover, is suspected of being used in a homicide in the city.

It has received a lot of attention from police in recent years because of the level of criminal activity, according to the Register.

It is also the area where Manuel Diaz, a documented gang member, was shot and killed by police on July 21.

That fatal police shooting, along with another the following day, sparked outrage and violent protests in the streets of Anaheim.

Anaheim police have opened fire on seven suspects this year, killing five of them.

By comparison, there were two deadly officer-involved shootings last year and none in 2010.

Police and city officials say the increase in police shootings is intertwined with an uptick in violent crimes and gang activity.

Anaheim police also say that they are seeing a lot more guns on the street.

The increase went against a national trend that saw a 4% decrease in violent crime.

"I'm very happy today that this could be a first step toward some real recovery in some of our troubled neighborhoods," Anaheim police Chief John Welter said Friday.

"I'm going to continue to see that our police department stands tall and takes care of the criminal element, but also makes the streets safer."