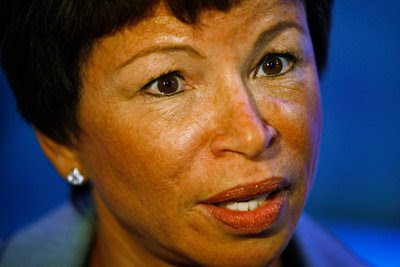 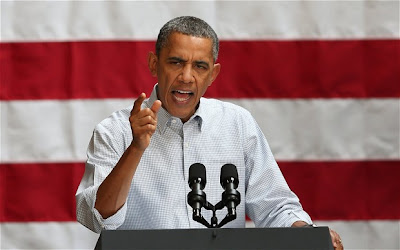 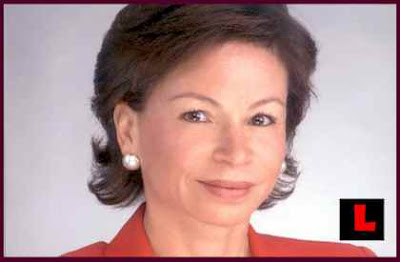 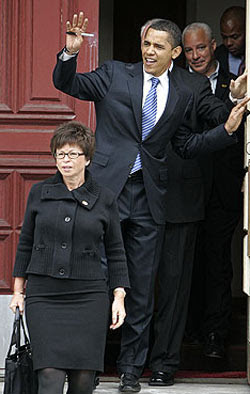 Jarrett and Obama leaving a building together in 2009


Get a load of America’s “mulatto elite.” The John Doe who calls himself “Barack Obama” and Madame Michelle rely completely on Valerie Jarrett, not in spite of her head-slapping incompetence, corruption, racism and radical leftism, but because of them. Jarrett and Obama share two traits common to blacks: Toxically high levels of self-esteem, and delusions of grandeur. Jarrett told David Remnick that “Obama” is “just too talented to do what ordinary people do.” Unfortunately, in the age of Jim Snow, modestly talented, corrupt, black-enough racists like “Obama” and Jarrett are always given jobs way above their abilities.

I put the following article's highlights in boldface.

President Obama canceled the operation to kill Osama bin Laden three times before saying yes, because he got cold feet about the possible political harm to himself if the mission failed. Instead of listening to advisors from the U.S. military, Defense, or even State, Obama was acting on the advice of White House politico and close friend Valerie Jarrett. Valerie Jarrett?

This account comes from Richard Miniter's upcoming book Leading From Behind: The Reluctant President and the Advisors who Decide for Him. Miniter has written a half-dozen books on the war on terror. He is relying on an unnamed source within the U.S. military Joint Special Operations Command who was directly involved in the operation and planning of the Osama bin Laden kill mission.

Is the story credible? According to Edward Klein, a reporter once asked Obama if he ran every decision by Jarrett. Obama answered, "Yep. Absolutely."

Edward Klein, former foreign editor of Newsweek and editor of the New York Times Magazine for many years, describes Jarrett as "ground zero in the Obama operation, the first couple's friend and consigliere." Klein — who claims he used a minimum of two sources for each assertion in his book on the Obama presidency, The Amateur — writes in detail about Jarrett opposing the raid on bin Laden. She told Obama not to take the political risk. Klein thought Obama ignored Jarrett's advice. Miniter tells us he listened to her, three times telling Special Operations not to take the risk to go after bin Laden.

We need to understand the role Valerie Jarrett plays in Obama's private and political life.

"If it wasn't for Valerie Jarrett, there'd be no Barack Obama to complain about," starts Klein's chapter on Jarrett. He quotes Michelle Obama on Jarrett's influence over her husband: "She knows the buttons, the soft spots, the history, the context."

No one outside Michelle has the access or power over Obama's decision-making like Jarrett does. Here's an odd little fact that gives some insight into what kind of president Obama is: Michelle, Michelle's mother, and Valerie, and only a few others in Washington, are allowed to call Barack by his first name. After work, Jarrett joins Obama at night in the Family Quarters, where she dines often with the First Family. She goes on vacation with them.

Jarrett's title is the weird mouthful "Assistant to the President for Public Engagement and Intergovernmental Affairs." She is the gatekeeper, but she is also much more than that. She occupies Karl Rove's and Hillary's old office and has an all-access pass to meetings. She shows up at the National Security Council, at meetings on the economy and budget. She stays behind to advise Obama on what to think and do. Obama uses her as his left-wing conscience. Klein's sources describe how at each pressing issue, Obama turns to ask her, "What do you think the right thing to do is?" As president, he likes to have her next to him "as the voice of authentic blackness in a White House that is staffed largely by whites."

[N.S.: “Authentic blackness” is a euphemism for black racism.]

A longtime friend told Klein that Jarrett is the "eyes, ears and nose" of the Obamas. She tells them whom to trust, who is saying what, whom to see at home and abroad. Michelle wants her there: "I told her ... it would give me a sense of comfort to know that (Barack) had somebody like her there by his side." As Obama told the New York Times, "Valerie is one of my oldest friends. ... I trust her completely."

To understand why Obama relies so heavily on Jarrett, we must remember the president's identity crisis as a black man, which is the main subject of his memoir, Dreams from My Father. Valerie Jarrett's adoption of the Obamas as her friends and protégés in Chicago's upper-crust black society was one of the greatest things that ever happened to Obama. Until becoming a community organizer, Obama tells us he felt himself to be an inauthentic American black. Nothing in his life helped him understand or fit into the American black community.

Within a few weeks of Obama's birth, conceived out of wedlock as he was, his mother moved away to a different college, leaving Obama's African birth father behind in Honolulu. There may have been a shotgun wedding or not — in the memoir, Obama says he is not sure. The only time Barack set eyes on his father was a brief visit when he was ten. Our president lived with his white mother, then with her and her Indonesian husband in Indonesia from age six to ten. He was so unhappy that he chose to leave his mother and live with his white grandparents back in America. Obama's America was the tolerant, wealthy American world of Honolulu's top prep school.

His only black experience was his grandfather's creepy old friend, Frank Marshall, a card-carrying Communist and self-disclosed pederast, who was Obama's voice of authentic blackness. One result of this lonely and unhappy childhood as a mixed-race child was Barack Obama's envy problem. The key to understanding Jarrett's power over the president is that Obama didn't just envy people with normal parents and loving, successful fathers. He envied American blacks, especially those who grew up in intact black families, knowing who they were, comfortable in their black skin.

Valerie Jarrett reflects Obama in many ways. Like himself, Valerie looks more white than black. Her mother had three white grandparents, and her father was black. Like Obama, she lived in the Muslim world for part of her childhood, when her father practiced medicine in Iran. Like Obama, she is a committed leftist. But there are crucial differences. Her father was not a drunk Kenyan polygamist like Obama's, but a famous pathologist and geneticist. Her mother was not a leftist expatriate like Obama's, but a distinguished psychologist. Valerie married into Chicago's black elite, the top rung of African-American society. She went to Stanford, got a law degree from Michigan, and became Mayor Richard Daley's deputy chief of staff, "the public black face" of his administration.

When Valerie Jarrett hired Michelle to work for Daley and befriended her, the Obamas gained access to the exclusive world of upper-class black Chicago politics. Valerie knew everyone whom it was important to know in black and Jewish money circles. She gave Barack entrée and legitimacy. She financed and promoted his ambitions for national office.

Obama finally belonged. Not that Jarrett's record in Chicago was anything to be proud of. Jarrett was known for her corruption and incompetence. [Black racists consider showing integrity and competence “acting white.”] Daley finally had to fire her after a scandal erupted over her role in misuse of public funds in the city's substandard public housing. She went on to become CEO of Habitat Executive Services, pulling down $300,000 in salary and $550,000 in deferred compensation. Again, she managed a housing complex that was seized by government inspectors for slum conditions. The scandal didn't matter to Obama. The sordid corruption was all part of Jarrett's Chicago success story.

The president turns to Valerie Jarrett for definitive advice on all these issues. She has given him terrible advice over and over, and still he turns to her.

Her true job is to make Obama feel proud of himself. When Obama looks at Jarrett, he sees himself as whole and good and real. He is no longer the fake black, the fatherless kid flailing around in a white world, tortured by the unfairness of it all. She fills the emptiness at the core of his identity. She admires and adores him. Jarrett told New Yorker editor David Remnick that the president is "just too talented to do what ordinary people do." And the icing on the cake — she shares his left-wing politics that project unfairness out onto white America.

Obama relies on Jarrett to create the White House bubble he likes to live in, where his narcissism is stroked and his desire to do the big, left-wing thing is encouraged. Jarrett is the doorman. She runs access to the president. As Klein puts it, she guards him from meeting with "critics and complainers who might deflate his ego." No one gets past Jarrett who has an incompatible point of view.

Jarrett pushed ObamaCare. At the beginning of Obama's presidency, there was pressure on Obama to focus on the economic crisis. Rahm Emanuel advised a small, bipartisan health care reform with popular items such as coverage for young adults — to get it passed quickly and focus on the country's money problems. Jarrett urged the president to be true to his left-wing agenda. She was all for having Reid-Pelosi create the ObamaCare assault on the American health system and ramming it through on a one-party vote, using Chicago-style politics, while Obama crossed the country doing what he does best: make speeches. Obama liked Jarrett's idea. Emanuel is now out of the White House.

Larry Summers, the director of the president's National Economic Council, warned Obama that the federal government should not get involved in venture capital of any sort. Summers understood that crony capitalism sabotages economic growth. Huge government funding distorts and destroys whatever market segment it touches, replacing economic decisions with political ones.

A member of Obama's finance committee warned the president that Solyndra was going bankrupt. But it is Obama and Valerie who see eye to eye, and they saw the value to Obama of rewarding his political cronies. It worked fine in Chicago. Larry Summers is now out of the White House.

Jarrett pushed Obama to take on the Catholic Church over contraception, arguing that it would appeal to single women (she was right) and that religious freedom isn't important (she was wrong). Bill Daley, who had replaced Rahm Emmanuel as chief of staff, argued against Obama pushing contraception on the Church and invited Archbishop Timothy Cardinal Dolan of New York to meet with a displeased Obama, who didn't appreciate hearing from the Church. Daley is now out of the White House.

Valerie Jarrett is the most powerful woman in Washington. She has guided the president's decisions on health care, the budget, the stimulus, the deficit, foreign affairs.

So when Jarrett told Obama that the mission to kill bin Laden was too politically risky, and to play it safe, it is entirely plausible to believe that the president listened to her. It is consistent with everything we know about Obama's dependence on her. According to Miniter's source in the U.S. Military Joint Special Operations Command, Obama listened to her for four months, dithering and deciding no the first three times the military told him that the time to get bin Laden was now.

In The Amateur, Klein reports that another worry won out. Obama was even more scared of the political fallout if voters learned he'd passed up the chance to get bin Laden. What decided him wasn't the national interest, but politics. For once, the president disagreed with Valerie Jarrett.