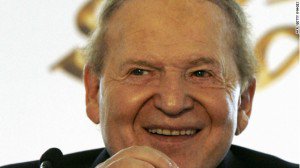 S. Adelson: I bought them all! H/T CNN

I have had a soft spot for the Old Left webzine Truthout ever since they enabled me to write Truthout Correct on Martin Luther King which noted their entirely valid complaint that King’s memory has been commandeered and his leftism suppressed. Partly also because judging by their fundraising appeals they are as penurious as VDARE.com.

Why in an era plentifully supplied with liberal Billionaires this should be so is answered by reading Legalized Bribery Has Allowed Sheldon Adelson to Buy and Sell Politicians By The Daily Take Team Tuesday, 22 July 2014. This is a blistering but impeccable denunciation of Plutocratic influence. Truthout is not Cultural Marxist: they think it is simply the rich who are evil.

According to CNN, sources inside the Republican Party have said that Adelson is prepared to make as much as a $100 million "investment" in the 2014 midterms, trying to help Republicans win back control of the Senate.

And make no mistake about it; when rich people or corporations put money into politics or politicians, it's an investment, and they're expecting a financial return, whether it be in lower taxes or fewer regulations.

Shelley Adelson dumping $100 million into our democracy and Wall Street executives having a change of heart …are just two examples of the rampant bribery that's taken over American politics, which is considered both immoral and illegal in virtually every other developed country in the world.

Thanks to the Supreme Court…the wealthy elite and corporations have slowly but surely been able to gain near total control over our democracy and political system.

This is quite correct except perhaps about ‘slowly’.

The irony is of course that Truthout, displaying typical liberal ignorance about what is going on the other side of the political hill, fails to see that this torrent of cash is washing the Republicans to the left – indeed to the left of their voting base.

As I noted in Thanks, Harry Reid: GOP Owner Sheldon Adelson Confirmed As Social Leftist the evidence is conclusive: Adelson is a liberal - albeit a Zionist and a wage-minimizing employer. His advertorials in the Wall Street Journal at the turn of the year explicitly declared for Amnesty and socialized health care, no doubt the reason Boehner and Co prevented any effective resistance to the latter. Many of his peers are cut from the same cloth.

The central fact about the 2013/2014 Amnesty/Immigration Acceleration struggle is that the GOP leadership has been bought. They want to work for the AdelZuck Party.