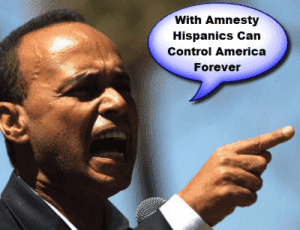 You almost have to admire them.  Luis Gutierrez is becoming increasingly frank that he regards himself as a foreigner living within the United States, and he hopes to displace the American people.

Speaking at the National Council of La Raza conference in Los Angeles, Gutierrez said that Obama assured him during a White House meeting with Members of the Congressional Hispanic Caucus last week that he would be as "generous and broad" as he can to "stop the deportation of our people each and every day."

"You gave us a down payment when you freed 600,000 DREAMers from deportation," Gutierrez said. "Now it is time for the president in the United States... [to] free the Mom and Dads of the DREAMers. And to go further. Be broad and expansive and generous."

The media is frantically looking for signs of white identity among the flag waving immigration protesters, but the frankly tribal remarks of a supposed United States Congressman to an organization bluntly called "The Race" is not worthy of notice.  Like the murderous Eric Holder, Gutierrez is just another example of a Minority Occupation Government that treats the historic American nation like a conquered people.

But perhaps that's just what we are.