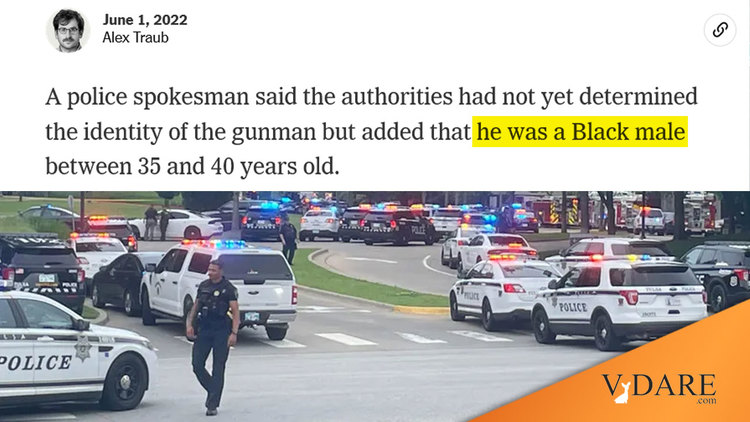 Earlier: Sailer’s Law of Mass Shootings And Coulter’s Law Both In Operation This Weekend

A shooting in Oklahoma has already been announced by local authorities as having been done by a black male. They haven't announced his name, yet, or shown his picture, just said he was black.

This seems to violate Coulter's Law.

But in a good way, as if for once authorities and media were doing their job. However, it does not violate Sailer's Law (aka The Leaded Law) in that while headlines said 4 dead, there were up to ten wounded. (Note: this fact has not reached any MSM headlines—you have to read down in the story to the usual 18th paragraph.)

CNN reports, in an article which implies that this is a gun control story:

It was unclear whether the four people killed were medical staffers, patients or visitors, said Dalgleish, who said the shooting took place at an orthopedic center in the building.
In addition, fewer than 10 people suffered non-life-threatening injuries, Meulenberg said. Authorities are trying to determine if they were wounded by gunfire or during the chaos of escaping the scene, he said.

However, this is not a typical Sailer's Law shooting, which involves groups of young black men blazing away in a nightclub or at a block party. (To quote Steve Sailer again, "Jill Leovy’s 2015 book Ghettoside mentions 'unwanted party guests' as a common cause of murder.")

Those are murder attempts, but this kind of shooting is where the person has decided to kill everyone he's mad at, and then himself. That kind of thing we frequently see in blacks who've decided their employers are racist, and commit a workplace mass shooting. We call that a "Disgruntled Minority Massacre" and what makes it a phenomenon is (a) its explicitly racial motive and (b) the fact that the deceased are sometimes investigated to see if they were racist—to see if, in Steve Sailer's formulation, the deceased whites "had it coming."

But this local news story, posted with caveats by David Hines, suggests that the definitely black shooter had a possibly black target:

Again, 24-hr rule, but current reports are perp was targeting a specific doctor; shooter is reportedly a black male in his 30s or 40s, and per a black-focused Oklahoma website the doctor he was targeting is black too. https://t.co/aAkaAgNhe6

That story, by a local black news site, now says

This article originally named a potential victim who has not yet been verified. We apologize for the insensitivity.  The Black Wall Street Times will update this article as soon as we receive more information.

The doctor named in the story may not be one of the four dead, by the way; reports say that the unnamed gunman didn't find who he was looking for.

So at the moment, we still don't know, but this, like other black shootings, will continue to attract less attention than the one white shooting in Buffalo.