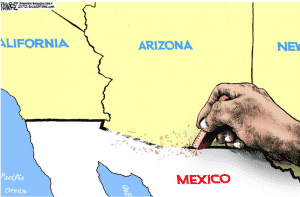 This summer when the Kidinvasion surge was first news I pointed out that Pelosi Stated Obamacrat Immigration Policy: Not Open Borders: NO Borders. GOP/AdelZuck response: Zzzzz. In other words the Obama Administration has changed direction from trying to accelerate immigration to simply stopping enforcement.

Leon Rodriguez, the former Civil Rights lawyer/thug who became chief of the U.S. Citizen and Immigration Services segment of the Department of Homeland Security in July, just arrogantly and loudly proclaimed this again yesterday at the 11th annual immigration law and policy conference hosted by Georgetown Law School.

He topped this off by proclaiming

“Immigrants are good for America,”

He also said that young illegal immigrants should be given a chance in America. Rodriguez noted that many young illegals are “willing to break their backs” at U.S. jobs and represent a potential "to energize” the economy.

He obviously agrees with Michael Bloomberg that that native-born Americans are stupid and lazy and need to be displaced.

Rodriguez apparently made no mention of policing the borders to prevent this invasion. However, to be fair, he did raise the issue of deportation

...the nation has to provide “due process” to make sure that a mistake isn’t made and a child seeking refuge or asylum due to intolerable conditions isn’t mistakenly sent back home

Rodriguez did not provide any details about the president’s pending plan, but said his agency was getting ready to enforce it.

The Obamacrats have decided they can dissolve America’s borders. I have to say this is a triumph for Peter Brimelow’s judgment. As he said in Obama's Immigration Speech: Stop Laughing, He's Serious July 3 2010

Obama's always gotten everything he wanted on an Affirmative Action platter. Why not Obamesty?

I think he'll go for it.

Four years later it is pointless blaming this enemy of America. The culpable group is the leadership of the GOP who failed to check his despotism when it became apparent.

I repeat: Obama’s Border Dissolution Is Treason. The Answer Is Impeachment. It Would Work.