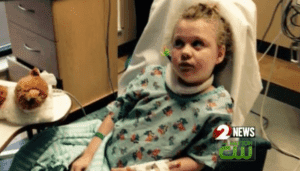 Last Friday while I was reporting in EV-D68 Cases Leap 134% In October: CDC Buries News on the dishonest management of the Centers for Disease Control website purportedly telling Americans about the evolution of this plague, the intrepid and amazingly industrious Neil Munro was publishing Obama’s Border Policy Fueled Epidemic, Evidence Shows The Daily Caller 10/31/2014.

This sprawling (4,000 word) essay is the definitive statement of the case that the Obamacrat Kidinvasion stratagem has created a devastating health risk for American families as I myself noted in early October in American Children Dying Of EV-D68 Because Of Obama’s Kidinvasion Malfeasance. Showing its customary good news sense the Drudge Report has kept the story at the top of its page since the small hours of Saturday morning.

Speaking as a parent, obviously losing an infant is a devastating blow – but being in a family condemned to spend a lifetime with a paraplegic is much worse.

“Kinley Galbreath, from Hamilton, has spent the past three weeks in intensive care at Children’s of Alabama, where she remains on a ventilator– paralyzed from her arms to her legs,” reads an Oct. 8 TV report from Alabama…

“On the third day is when she lost movement from her legs down,” her mother continued. “The only thing she’s had control of has been her toes. And that’s what she wiggles to let me know something’s wrong. And she’ll blink her eyes for yes, and won’t blink her eyes for no.’”

A series of government researchers, health experts and academics refused to comment, or else urged self-censorship, when they were pressed by TheDC for statistical and scientific data that would exonerate Obama and his deputies.

“I would just steer away from that— it is not helpful, so why bring it up,” said Lone Simonsen, a professor at George Washington University’s Department of Global Health and the research director of the university’s Global Epidemiology Program

Columbia University researcher Rafal Tokarz, one of the nation’s top experts on the EV-D68 virus, declined to comment to TheDC about the impact of Obama’s border policies. “I cannot comment… and at this time it would not be appropriate for me to do so… I would really rather not comment,” he said in email conversations.

…government and media reports show the EV-D68 epidemic suddenly appeared in Missouri, Colorado and Chicago in the second week of August, sometimes even before schools opened….The outbreaks also appeared in many states, sometimes isolated from the first outbreaks…viral epidemics are usually powered by one new variety of a familiar virus. There are three genetically distinct subtypes of EV-D68…When CDC officials were asked by TheDC to explain this multi-city, multi-strain anomaly, they waffled.

Since 2011, Obama and his deputies have allowed 170,000 adults, children and youths from Guatemala, El Salvador and Honduras to cross the border and apply for green cards.

Under existing immigration law, Obama could have barred the migration and repatriated the first waves of migrants in 2010 and 2011. He did not block the flow, but instead directed federal agencies to let the growing number of migrants settle throughout the United States.

To this VDARE.com would add