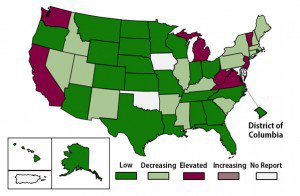 As I noted on October 19th in Immigrant-Supplied EV-D68 Illnesses Spread. CDC Dodges. WHERE IS GOP? The Centers for Disease Control started during the previous week posting a map on their website showing “Activity of Enterovirus D68-like Illness in States” on a weekly basis. Above is the latest map, for the week of October 19-25.

Hold the cheers for transparent governance though! The CDC presentation has been deceitfully crafted to hide the numbers involved from the Public.

The commentary on the map gives the most encouraging spin

But the number of cases involved is not mentioned – much less the weekly change. This would not make the grade in a normal business or academic presentation.

On the page involved Activity of Enterovirus D68-like Illness in States there is a link Back to Enterovirus D68 in the United States, 2014 which actually does gives a cumulative number for the cases reported “From mid-August”. This seems to be updated daily.

But there is no archive. So unless a reader screenshots the data comparisons are impossible. The CDC’s E-D68 website from the point of view of informing the American people is a fraud.

Happily VDARE.com’s in-House cyber sleuth, James Fulford, has been able to retrieve some of the data points.

Now this is not the exponential rate a major epidemic would see. But curiously the total has been unchanged at 1,105 since at least the 28th. This seems odd for a series which was formerly rising by 20 to 30 cases a day.

What considering the squalid deviousness of this site design suggests is if there were to be a major epidemic America would not learn of it from the CDC.

And it would be wrong to overlook the tragedies involved here. Sharyl Attkisson whose work uncovering the link with immigration I saluted in American Children Dying Of EV-D68 Because Of Obama’s Kidinvasion Malfeasance has a poignant update: CDC: Polio-like Enterovirus D-68 Linked to 9th U.S. Death

A Phoenix couple told a television news outlet that doctors confirmed Enterovirus killed their infant son, Lancen Kendall. They said CDC was testing to see if the D68 strain is to blame. The couple says their child showed no symptoms but simply did not wake up from a nap earlier this month…

In Cincinnati, an eight year old girl is said to be battling paralysis and illness after the sudden onset of EV-D68 in September. Madison Grigsby is paralyzed in her legs and feet. The Ohio Department of Health has reportedly confirmed eight confirmed cases of EV-D68 at Dayton Children’s Hospital, where Grigsby is being treated, and eleven at Cincinnati Children’s.

These disasters would almost certainly not have happened if Obama had not adopted a No Borders policy this summer. His recklessness is costing and ruining lives.