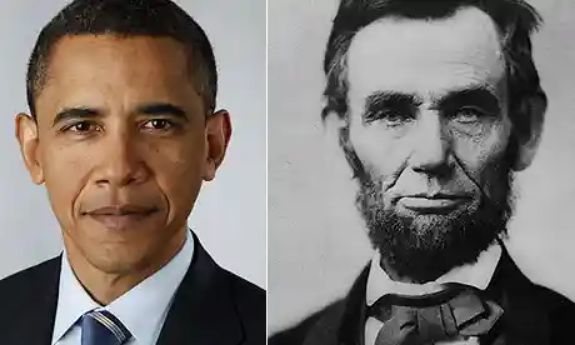 A stunning amount of nonsense is being spewed by the MSM about the similarities between President-elect Obama and Abraham Lincoln. The simultaneous eruption of these stories in so many places clearly indicates that the Obama publicists have been at work. Consider this credulous gushing from The Washington Times (which once upon a time would have known better):

Mr. Obama's entire inaugural celebration constitutes a massive homage to Lincoln, considered one of the country's greatest presidents and the most eloquent chief executive ever….

Some might shy away from using Lincoln as a measuring stick, but Mr. Obama appears to relish the parallels…The official theme of Mr. Obama's inauguration is "A New Birth of Freedom," a phrase taken from Lincoln's Gettysburg Address…

The train trip taking Mr. Obama from Philadelphia to Washington to be sworn in Tuesday tracks the final leg of Lincoln's own train trip from Springfield to Washington for his first inauguration in 1861…At Tuesday's inaugural ceremony, first lady Michelle Obama will hold the Bible used by Lincoln in his first inauguration in March 1861 while her husband takes the oath of office from Supreme Court Chief Justice John G. Roberts Jr. Mr. Obama will be the first president to take his oath on the 1,280-page Bible printed in 1853 since that day. [In ways great and small, Obama parallels Lincoln,  [January 17, 2009]]

Obviously, WASP traits like reserve and self-effacement are not going to be part of the new Administration (predictable, I guess, considering the pattern of appointments so far announced).

But apart from the sacrilegious poor taste shown by Obama and his managers, the question has to be asked: are they serious? Do they know what Lincoln actually did?

Even allowing for the fact that most of the crowd around Obama are the sort who think America was founded at Ellis Island and that the Statue of Liberty doggerel is part of the American Constitution shouldn’t they have some idea Lincoln had consequences?

Apart from plunging the country into by far the bloodiest war in its history—in which virtually only Americans died—and ruining for almost a century what had been a very prosperous section of the country, Lincoln was guilty of doing so mainly for the financial and political gain of his Northern cronies.

As luminously and I believe conclusively demonstrated by Tom Dilorenzo in The Real Lincoln, Lincoln’s central interest was breaking the South’s preference for low tariffs and cheap British manufactured goods. The objective was protection for Northern manufacturers and the funding of lucrative infrastructure projects—“Internal Improvements”. Slavery alone was not enough to motivate the war—which is why he tried to dodge the issue when he took office. He only fully gave in to the fanatical abolitionists when the war effort was faltering.

Every other country which abolished slavery did so without war.

So what is meant by all this Lincoln trumpeting? Are we being told that Obama intends another massive economic transfer from one group to another, engineered by reckless use of state power? That the ends justify the means? Is the battering of founding-stock Americans the objective? (Pre 1860, unlike the North, the South had had little immigration for a several generations.)

The Lincoln myth is essentially a fraud perpetrated on the credulous and the emotional. The Obama myth is also a fraud, as Steve Sailer has exhaustively demonstrated in America's Half Blood Prince. But unfortunately, Steve also found the truth:

Obama …moved to Chicago to work as an ethnic activist to help the impoverished black community wring more money and services from the government. That government money was wrecking the morals of the housing-project residents never comes up in Obama’s book. (P136)

…community organizing had its upside: Obama made a name for himself and networked with what has become his political base: the social services industry. (P137)

The basic social problem that both Farrakhan and Obama want to alleviate is that, on average, blacks have less money than whites. Farrakhan‘s plan to create a separate black-only capitalist economy in which blacks could not be cheated by whites out of the hard-earned wealth they would create is doubtful on various grounds…..

In contrast, Obama’s plan to get more money for blacks from whites by further enlarging the already enormous welfare / social work / leftist charity / government / industrial complex is both more feasible in the short run, and, personally, more fun for someone of Obama’s tastes…insulting whites in the Black Muslim manner is counter-productive, because whites will have to pay most of the bills. (P157)

Steve envisages that Obama will become much more radical in his second term. I am not so sure we will have to wait. Those who remember the sudden emergence of Hillary Rodham Clinton after the’92 election and the massive Health Care Battle which followed will find the stories of “Barack Hussein Obama” being sworn in significant.