The President has mostly kept out of the mega-amnesty/immigration tsunami debate, since his presence is considered unhelpful by open-borders extremists which is curious when you think about it. But on Tuesday Obama signaled his support for lawbreaking foreigners to become future Democrats by welcoming a batch of well scrubbed DREAMer kiddies to the White House for a photo op. 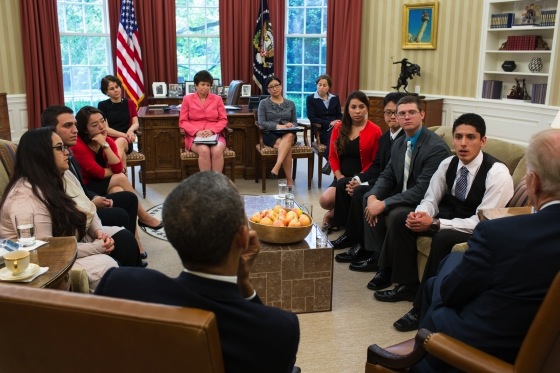 The White House issued a laudatory press release about the young foreigners:

Readout of the President and Vice President’s meeting with Dreamers and Family Members of Undocumented Immigrants, May 21, 2013

The President and the Vice President were moved by the stories of courage and determination of these young immigrants and their families. The Dreamers shared how their lives have been positively affected by the deferred action process and emphasized that they and their families need a permanent solution that will allow them to fully contribute to the country they call home. [. . .]

Meanwhile, the President has neglected to meet with union representatives of border control officers who can report on enforcement issues from the front lines, as pointed out by a letter from Senator Jeff Sessions and Rep Bob Goddlatte. But Obama seems unconcerned with the border enforcement which amnesty enthusiasts have promised will be front and center in the legislation (just like 1986) along with the nearly immediate work permits for millions of foreign job thieves.

Not to worry, Mexico, the border will continue to be open enough for remittance senders and drug smugglers to get through.

Two key Republicans have blasted President Obama for not meeting with a union representing 7,000 immigration and customs officers.

House Judiciary Committee Chairman Bob Goodlatte (Va.) and Sen. Jeff Sessions (Ala.) in a letter to Obama argue his administration is shunning concerns the group has over immigration reform.

The National Immigration and Customs Enforcement Council has warned Congress that immigration reform, one of the president’s highest priorities, will cause a surge of illegal immigration.

The administration has normally been responsive to the concerns of labor but the immigration and customs officers’ union has been unsuccessful in getting any White House attention.

“We write today to express concern over the exclusion of immigration and customs enforcement officers and their representatives from the negotiations surrounding immigration reform,” Goodlatte and Sessions wrote in a letter dated May 23.

“To be effective any immigration reform bill must heed the warnings from our federal immigration agents,” they wrote. “Unfortunately, far from being included in the process, ICE officers have been shut out and have even had their day-to-day operations handcuffed by [Department of Homeland Security] officials to the point of being unable to carry out their sworn duties.”

The lawmakers wrote that the National ICE Council requested a meeting with the administration three months ago to weigh in on immigration policy and “share their firsthand concerns over the breakdown of interior enforcement.”

It has yet to receive an invitation, according to Goodlatte and Sessions.

Sessions has emerged as the most outspoken Senate critic of the 800-plus-page immigration reform bill crafted by the Gang of Eight.

He offered a variety of amendments to strengthen the bill’s enforcement provisions that Democrats defeated during the Judiciary Committee’s mark up. His proposals included requiring the construction of 700 miles of double-layered border fence along the southern border before granting provisional legal status to illegal immigrants.

Goodlatte’s decision to team up with Session on the letter to Obaam shows that the Republican chairman with primary jurisdiction over immigration reform has concerns over border-security provisions in the Senate bill.

Border-security officers wrote a letter Monday warning Congress the Senate immigration bill would create a surge in illegal entries by failing to secure the nation’s borders before granting provisional legal status to millions of illegal immigrants.

The legislation grants legal status only to illegal immigrants who came to the U.S. before Dec. 31, 2011, but the border-security officers said that would make little difference.

“Cut-off dates established in S. 744 will mean little to those in other countries who are unfamiliar with the 867-page bill,” they wrote. “Without a strategy of border security first, S. 744 will only draw more illegal immigrants into the United States, resulting in unnecessary harm to many.”

The Senate bill is expected to reach the floor in June. House negotiators are still working on companion legislation.